Heck, it's Only (Workers) Money

How is the AFL-CIO spending over $50 million in workers dues money? On political mailers, of course. National Journal reports that over 600,000 pieces are hitting mailboxes in four battleground states.

The AFL-CIO begins a ramped-up campaign to define Sen. Barack Obama with union members and their families in battleground states, focusing heavily on working-class, swing union voters in OH, MI, PA and WI. The goal, per union officials, is to dispel the many rumors circulating about Obama via two new mailers, dropped today, that ask and answer still-looming questions about the candidate. The union will send the pieces to 600K swing voters living in the four critical battleground states.

The mailers are just one leg to a very expensive political stool the union bosses are constructing.

Here are other elements of the AFL-CIO’s effort for Obama:

— The group’s focus is on mobilizing working people in 24 states, targeting about 13M union voters, including members, householders, retirees and those involved with the group’s community affiliate, Working America. Union voters make up between 25-35 percent of the vote on Election Day in OH, MI, PA and WI.

— In August, AFL-CIO volunteers will deliver 1M flyers about Obama’s record and background to worksites across the country. Overall, more than 4M flyers have already been distributed to worksites, including flyers about McCain’s “anti-worker” record, sources said.

— Every weekend in August, union volunteers will canvass neighborhoods across the country, providing voters with information about Obama’s record and contrasting it with McCain’s. Again, swing voters will be targeted. AFL-CIO volunteers will also be phone banking all month to swing union voters in key states.

— Members of Working America, the community affiliate of the AFL-CIO for those without a union, are canvassing nightly to discuss the issues that matter to working-class voters. In OH alone, more than 160 canvassers are going out every day. Working America currently has nearly 2.5M members, including 800K in Ohio. 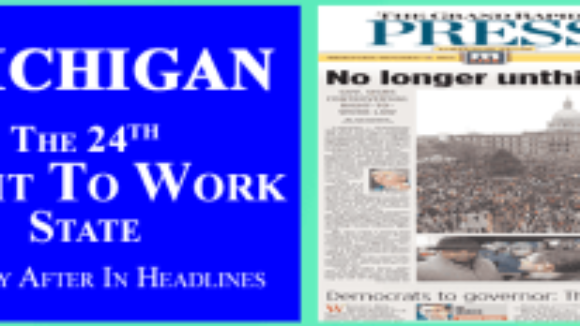 Did you know that 80% of Americans support the Right to Work Principle?

National Right to Work Committee President Mark Mix’s brief summary of how Michigan became a Right to Work state with the UAW’s help...

Check Out the Latest Right to Work Michigan Investments!

Three businesses that are investing in Right to Work Michigan are JD Castings, Grand Traverse Plastics, and Ford Motor Company.

What Companies are Investing in Right to Work Wisconsin?

Three companies that will soon be investing in Right to Work Wisconsin include Generac Power Systems, Heartland Produce, and PartsBadger.