This fall, for the first time in decades, the Democrat presidential ticket is running unabashedly on a platform of barring Right to Work protections for employees in all 50 states.

Of course, that includes the 27 states where forced union dues and fees as a condition of employment are currently prohibited.

In the words of New York senior writer Eric Levitz, whose lengthy interview with him was published by that magazine in July, Mr. Shor “is among the most influential data gurus in Democratic politics.”

In 2012, Mr. Shor was entrusted by the Obama team with creating the forecasting model the “White House used to determine where the race really stood.”

“In my career,” he told Mr. Levitz, “I have seen circumstances where polling has said to do one thing, and then we didn’t do it for ideological reasons.”

As a key example, he cited the Obama Administration’s “radicalism” in making so-called “recess” appointments of rabidly anti-Right to Work union lawyers and bureaucrats to seats on the powerful National Labor Relations Board.

Barack Obama repeatedly made such “recess” appointments when the U.S. Senate, which is constitutionally charged with vetting such presidential appointments, was not in recess.

Mr. Obama and his associates didn’t do this “to win votes,” Mr. Shor admitted. He elaborated:

“But Democrats do pro-[Big] [L]abor policies because the people who work on Democratic campaigns, and who run for office as Democrats, are generally very liberal [that is, pro-union coercion] people.”

David Shor is obviously on-target when it comes to the 2020 Democrat presidential campaign’s labor-policy strategy.

“Joe Biden and his running mate, U.S. Sen. Kamala Harris [D-Calif.], are vowing to destroy all Right to Work laws as a means of firing up a cadre of forced-unionism militants in key swing states to go all-out to get them elected.”

“Money is clearly a key reason why the Biden-Harris campaign has agreed to come out in complete opposition to Right to Work even though poll after poll shows that roughly 80% of Americans who regularly vote in federal elections oppose forced unionism.”

Former Vice President Biden and Sen. Harris have affirmed their commitment to destroying Right to Work again and again in position papers and on the campaign trail.

For example, in December 2019, Mr. Biden told a crowd of Teamster bosses and staff in Las Vegas:

“We should change the federal law [so] that there is no Right to Work allowed anywhere in the country.”

Thanks to the monopoly privileges it wields over private-sector workers under federal law and over state and local government workers under the laws of the majority of states, Big Labor can be expected to pour over $2 billion into electioneering and lobbying in 2019-20.

“But this strategy has risks.

“Ordinary Americans, as David Shor recently acknowledged, think forcing an employee to pay dues or fees to a labor union just to get or keep a job is just plain wrong.

“And that’s not their only problem with compulsory unionism.”

“A growing number of Americans,” explained Mr. Mix, “recognize that the retention of current Right to Work protections and extending those protections to millions of additional employees are critical for the success of the U.S. economy.”

Data from the U.S. Labor Department’s household survey, he noted, shows that the 22 states that already had Right to Work laws on the books in 2009 enjoyed overall employment growth of 16.9% over the next decade.

That’s almost double the overall employment growth of 9.6% in the 23 states that have chosen, up to now, not to adopt Right to Work laws.

“Nine of the 10 highest-ranking states for 2009-19 growth in the total number of people employed are Right to Work states, noted Mr. Mix.

“If the total state Right to Work elimination planned by Joe Biden is adopted, the results will be a devastating loss of personal freedom for workers and a shipwreck for the U.S. economy.”

This Fall, the Committee Will Let Citizens Know Where The Candidates Stand

Even as they courted Organized Labor’s enthusiastic support in their campaigns, neither former President Obama nor 2016 Democrat presidential nominee Hillary Clinton went so far as to campaign openly in favor of prohibiting state Right to Work laws.

This year, Mr. Biden and Ms. Harris are obviously counting on rank-and-file voters not to notice just how extreme the unpopular federal labor policy they are proposing is.

At the same time, National Right to Work members, staff and leaders are doing everything feasible to ensure, through the Committee’s federal Survey 2020 program, that freedom-loving citizens across the U.S. know exactly where the candidates stand on compulsory unionism.

“With TV and radio advertising, through the mail and the Internet, and on the phone, Survey 2020 is informing millions of concerned Americans about the pro-forced unionism positions candidates like Joe Biden and Kamala Harris have already taken.

“The Committee is at the same time mobilizing Right to Work members and other Right to Work supporters to contact their federal candidates, including Joe Biden and Kamala Harris, and encouraging them to oppose union monopoly bargaining and forced unionism in the future.

“Survey 2020 will leave Big Labor politicians with a choice: Repudiate their records of support for union special privileges, or face the potential political consequences.

“Grassroots communications with elected officials who have expressed their support for employees’ Right to Work in the past, such as President Donald Trump, are another critical component of the survey program.

“Candidates who pledged to support Right to Work in their previous campaigns must be encouraged to reaffirm their commitment and back it up with effective actions.”

What Companies are Investing in Right to Work Indiana?

Four companies that are investing in Right to Work Indiana include Syra Health, Lunar Distribution, GroPod, and Kitchen 17. 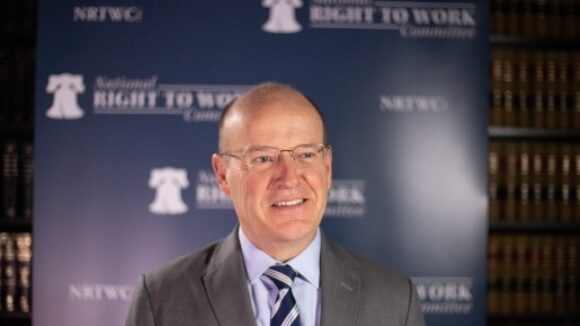