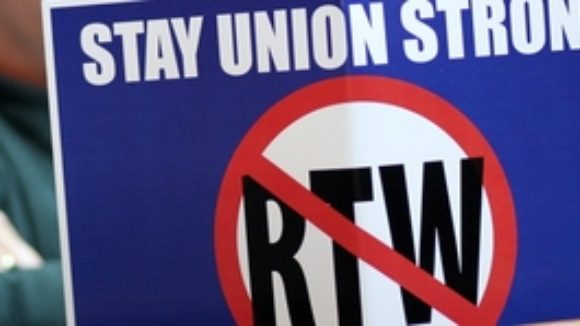 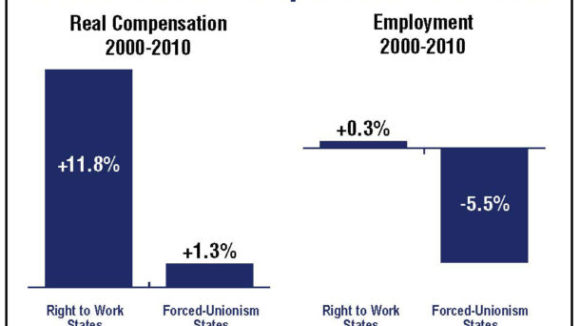 Right to Work Good For Pay and Benefits

By prohibiting compulsory union dues, state Right to Work laws spur the growth of private-sector employee compensation in the form of wages, salaries, benefits and bonuses, as well as employment growth. Sources: U.S. Commerce Department, U.S. Labor Department Private-Sector Compensation Growth Lags in Forced-Unionism States (Source: June 2011 NRTWC Newsletter) Even union bosses and their apologists sometimes grudgingly admit that long-term private-sector job growth in states that currently have Right to Work laws on the books far outpaces job growth in states that lack such pro-employee statutes. This fact is indeed hard to deny. From 1990 to 2010, according to the U.S. Labor Department, private-sector payrolls in Right to Work states soared by 32.0% -- an increase triple that of forced-union-dues states combined. Over the past decade alone, nationwide private-sector employment fell by 3.3% due to the impact of the severe 2008-2009 recession. But Right to Work states experienced an overall private-sector job increase, while forced-unionism states suffered a 5.5% aggregate job loss. Big Labor tries to downplay the significance of Right to Work states' large, persistent employment-growth advantage by suggesting that the jobs created outside of forced unionism's dominion are "the wrong kind." Unfortunately for union propagandists, however, U.S. Commerce Department data show that Right to Work states also enjoy a large, persistent advantage over forced-unionism states with regard to growth of private-sector employee compensation (including wages, salaries, bonuses and benefits). Real Compensation Grew Nine Times as Much Over Past Decade In Right to Work States