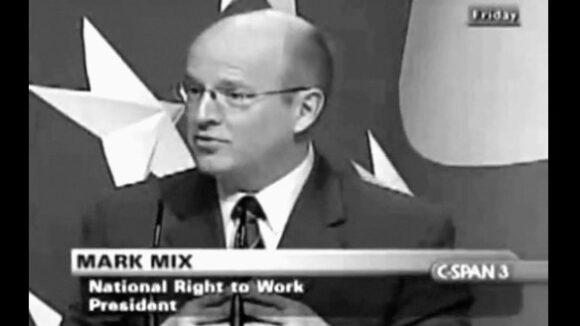 Teamsters Could Strike -- Against Themselves

Talk about embarrassing.  The unionized workers of the Teamsters’ Washington-based national staff are locked in a contract dispute with their own national organization and are threatening to strike against Boss Hoffa and company. Incredibly, Hoffa is preparing to…

Presidential candidate Ron Paul is a champion of workers’ rights. He is an ardent supporter of the right to choose whether to join a union. And he opposes any and all attempts to push Big Labor’s coercive agenda. Paul was…

The Northwest Indiana Times reports that “[n]onunion workers at the Hilton Garden Inn construction site . . .” in Hobart, Indiana, “. . . were victims of an attack that went well beyond a union-based picket line.” Project Superintendent…

Picketing isn’t what it used to be. National Public Radio [NPR] notes that the 30 people picketing in front of a bank in Washington, DC are not from the Carpenters Union, but, are homeless people being paid $8 an…