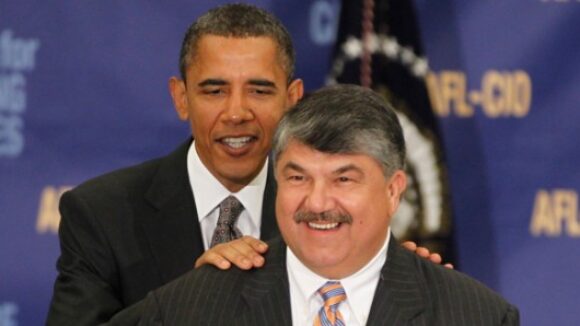 The Right to Intimidate?

The American Thinker blog lives up to its name with a post analyzing the faulty logic behind big labor's ACLU supported lawsuit attempting to overturn Michigan's Right to Work law: Do you recall what happened at the Wisconsin state Capitol building in March 2011, when the state Senate was considering legislation to curb public employee unions? For days, union members trashed the place. They blew horns. They swore at legislators unfortunate enough to cross their path. Litter was everywhere. Meanwhile, all Senate Democrats high-tailed it to Illinois, trying to prevent a vote. Not the prettiest exercise in representative democracy. In Michigan last December 6, someone at the Republican-controlled legislature decided not to have a replay of Wisconsin. The state police locked the doors at one point during afternoon debates over the proposed right-to-work law, with supporters and opponents who had already gained entrance staying inside. Four hours later, the House and Senate reopened the doors before both houses voted to pass the legislation. On Dec. 11, Gov. Rick Snyder signed it, making Michigan the 24th right-to-work state, which means employees in the Wolverine State can work without having to join a union.