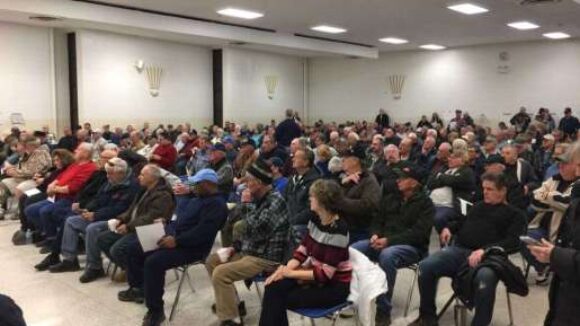 New York Teamsters, who had for decades been forced as a job condition to pay into a union-controlled pension fund, were pressured at meetings into approving immediate steep cuts in their pension benefits. CREDIT: RICK CARLIN/ALBANY (N.Y.) TIMES UNION Teamster… 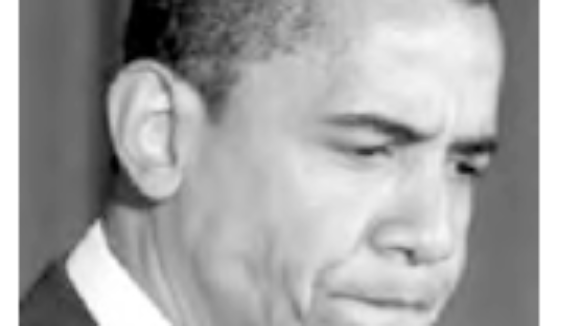 Meanwhile, United Autoworkers Union Bosses Pocket $3.4 Billion (Source: May 2011 NRTWC Newsletter) In late 2008, GOP President George W. Bush "loaned" a total of $19.4 billion in federal taxpayers' money to the Big Labor-controlled General Motors Corporation (GM). Mr. Bush assured taxpayers they would get their money back. But by the spring of 2009, we learned we would never get back any of the money Mr. Bush had handed over to GM shortly before he left office. His successor as President, Democrat Barack Obama, announced GM would never have to settle up with taxpayers. President Obama simultaneously earmarked an additional $30 billion in taxpayers' money to by-then bankrupt GM. In exchange, taxpayers got a 61% stake in the money-losing company. Echoing Mr. Bush, Mr. Obama and his advisors insisted that, when the government eventually sold off its whole stake in GM, taxpayers would get the entire $30 billion back, and perhaps even reap a profit. Just last August, the President said it again. He told a CNBC interviewer: "We expect taxpayers will get back all the money my Administration has invested in GM." 'Government Officials Are Willing to Take the Loss' 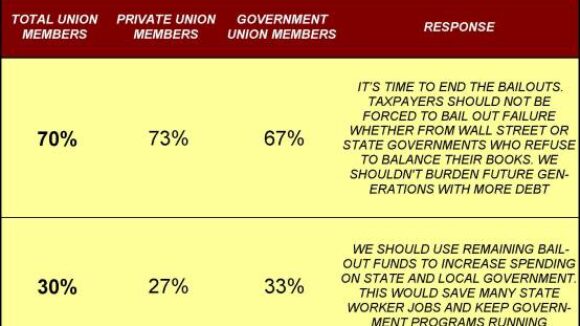 When asked, 70% of public and private sector union members believe that it is time to end bailouts of state governments and businesses according to a recent National Right to Work Legal Defense Foundation – Frank Luntz poll. Question…

When asked, 70% of public and private sector union members believe that it is time to end bailouts of state governments and businesses according to a recent National Right to Work Legal Defense Foundation – Frank Luntz poll. Question… 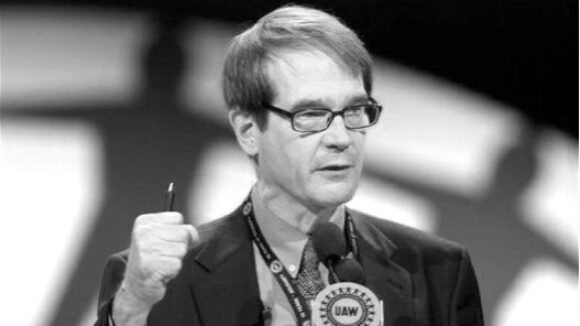 White House Again Exhorts Taxpayers to Feel Good About Boondoggle (Source: September 2010 NRTWC Newsletter) Autoworkers union President Bob King and other union bosses are the chief beneficiaries of the GM/Chrysler bailouts. Credit: www.motortrend.com In the summer of 2009, the Obama Administration handed over $49.5 billion in federal taxpayers' money to the Big Labor-controlled, money-hemorrhaging General Motors Corporation (GM). At the time, bankrupt GM was on the verge of being forced into liquidation. Its assets would then have been sold off. The White House publicly pitched this costly taxpayer-funded bailout as a bid to save American jobs. However, President Obama and his Administration actually knew full well that the number of Americans employed by GM would continue to shrink rapidly, even after the massive taxpayer bailout. Taypayer Bailout Hasn't Stopped Disappearance of Union Boss-Controlled Manufacturing Jobs In early 2009, GM had 47 production facilities in the U.S. By the end of this year, it will have just 34. The company's vehicle sales today, when the country's economy is recovering, albeit weakly, remain far below what they were in 2008, when the economy was in a recession. More than 80% of U.S. automotive manufacturing jobs are now in union-free firms, and these firms, not bailed-out GM and Chrysler, surely represent the future of domestic automotive manufacturing employment. Rather than workers, the single greatest beneficiary of the GM bailout was the United Autoworkers (UAW) union hierarchy. Along with sympathetic Obama agents, union officials were effectively left in charge of the company.

Some dare call it a coincidence. The same day that House Democrats return to Washington to hand state and teacher union bosses a $26 billion bailout, teacher’s union announces a “plan to rev up recess action to protect Democrats’ majority.”…

Payday for the Union Bosses

The Investor's Business Daily slams the Union Bailout bill introduced by Sen. Bob Casey (D-PA): Those who give to politicians expect a lot in return. That's clear from the budget-busting payoffs directed largely at organized labor by Democrats in Congress and the White House. A bill making its way through the Senate would bail out union pension funds to the tune of $165 billion. The bill's author, Democratic Sen. Bob Casey of Pennsylvania, wants the public to pay for the gold-plated union retirement benefits that the funds have mismanaged into oblivion. This has to be galling to average working saps who watch as their 401(k)s and IRAs plummet, only to be asked to pony up billions of dollars in subsidies for unionized workers — many of whom get to retire into the lap of unlabored luxury while still in their 50s. Casey's bill isn't the only gift that the White House and Congress have for the unions. Last year, economist and columnist Ben Stein estimated that as much as half of the $862 billion stimulus would go to unions, directly or indirectly. Even that might underestimate organized labor's take.

It is a Big Labor Bailout -- Again

The Daily Caller examines the Casey-Pomeroy bailout bill to give union pension funds $165 billion in taxpayer money by tucking it into an "emergency" spending bill making its way through Congress.  Anti-tax groups have weighed in with a letter signed by over 30 organizations opposing the bailout: Two recently introduced bills fit that description: the Preserve Benefits and Jobs Act of 2009 (H.R. 3936) and the Create Jobs and Save Benefits Act of 2010 (S. 3157). If enacted, they would jeopardize billions of taxpayer dollars to shore up massively underfunded union pension plans. These two bills mark a stark departure from traditional pension insurance. The Pension Benefit Guarantee Corporation (PBGC) insures the pensions of more than 44 million American workers and retirees in over 29,000 private, company-run single-employer and union-run multiemployer defined benefit pension plans. PBGC receives no funds from general tax revenues. Its operations are supported by insurance premiums—set by Congress—paid for by sponsors of defined benefits plans.  The two bills propose to use taxpayer dollars to bail out several multiemployer plans. Using taxpayer funds to pay for private pensions would be a first in PBGC history. That would be patently unjust. Most of the funds that would be eligible for this bailout were severely underfunded well before the financial crisis hit. That underfunding is largely due to mismanagement by the plan sponsors, who would now get a pass, at taxpayer expense.

The Wall Street Journal weighs in on the proposed Big Labor bailout: Union chiefs prefer the power that comes with managing huge pension investments—even if they’re failing. They are now counting on Mr. Casey to preserve their power by making…