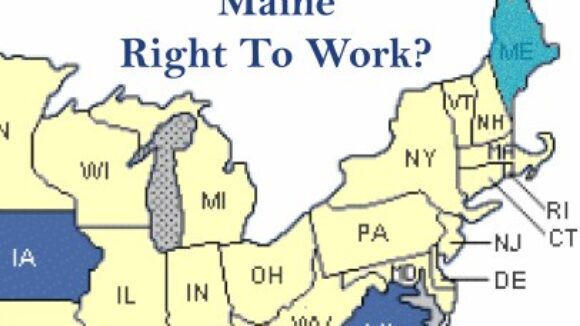 Maine Fights for Right to Work, Too

Like New Hampshire, Maine is looking to enact a Right to Work law. Writing for the Bangor Daily News, Matthew Gannon makes the case: Jobs, jobs, jobs. The first, last and often times only things on the mind of voters across the country right now are jobs. Politicians drone on endlessly about “job creation” and attack “job-killing policies” while voters punish those whom they perceive as being uninterested in improving the economy. Despite this, legislatures aren’t holding up their end of the bargain. Some minor things are being done that would help the jobs situation, but let’s be honest, a lot more could be done. Maine has a rather historic opportunity to lead on the issue of job creation, outflanking its more free-market neighbor, New Hampshire. Maine can, and should, pass a right-to-work law. Right-to-work laws exist in roughly half of the states in this country, mostly in the South and West. At their most basic level, these laws prohibit agreements between labor unions and employers which make membership in a union and payment of union dues a condition of employment. In other words, if you want a job but don’t want to join the union, you can’t be forced to as a condition of your employment. Imagine the opportunity that presents. Companies that want to bring their business to a northeastern state would have one option: Maine. That would be an incredible recruiting advantage that could help make Maine one of the most attractive places to do business in New England.Too often our laws have given special favors to unions, because unions play such a big role in elective politics. Unions funnel money into politicians who promise to help make unions more powerful, and in turn those same politicians make unions more powerful. It has always been a very incestuous “you scratch my back, I scratch yours” arrangement, to the detriment of workers.