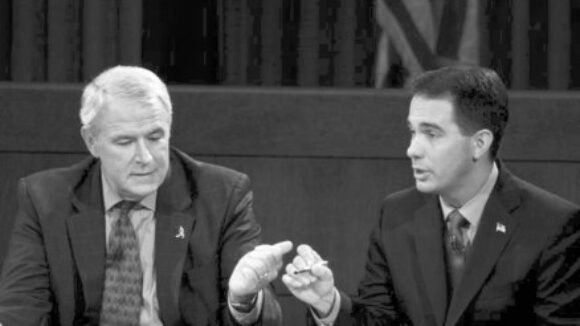 2011 All in All, 'a Hopeful Year For America' Union-label Milwaukee Mayor Tom Barrett (left) is a bitter political foe of Wisconsin Gov. Scott Walker’s. Nevertheless, Mr. Barrett admits the governor’s Big Labor-detested Act 10 has helped his city get control over its budget. Credit: AP (Source:  November-December 2011 National Right to Work Committee Newsletter) Early this year, Wisconsin Gov. Scott Walker (R) infuriated the union hierarchy, in his own state and nationally, when he introduced legislation (S.B.11) that would abolish forced union dues for teachers and many other public employees and also sharply limit the scope of government union monopoly bargaining. In response, teacher union bosses in Madison, Milwaukee, and other cities called teachers out on illegal strikes so they could stage angry protests at the state capitol and at legislators' residences. Government union militants issued dozens of death threats against Mr. Walker, members of his administration, and their families. Fourteen Big Labor-backed state senators, all Democrats, temporarily fled the state to deny the pro-S.B.11 Senate majority a quorum to pass the bill. In raucous demonstrations, union bigwigs and their radical followers actually suggested Mr. Walker's support for public employees' Right to Work made him similar to Mubarak, Mussolini, Stalin, Hitler, or even Satan. (This fall, national AFL-CIO President Richard Trumka gave his personal imprimatur to such ugly vituperation when he likened the Wisconsin governor to "Lucifer" in an interview published in Esquire magazine.) Thanks in part to public support mobilized by the National Right to Work Committee's e-mail and telecommunications activities, pro-Right to Work legislators were able to withstand the Big Labor fury and send S.B.11 to Gov. Walker's desk. On March 11, he signed into law the measure now known as Act 10. Forced-Unionism Supporters Pumped More Than $40 Million Into 2011 'Recall' Elections Act 10, formally known as the Budget Repair Act of 2011, took effect in June after fending off a union boss-inspired legal challenge in state court. Act 10 now protects most public employees from being fired for refusal to bankroll an unwanted union, but leaves untouched the forced-dues privileges of most public safety and transportation union bosses. "Despite its unfortunate exclusions, this law represents a step forward for public employees' free choice," said Committee President Mark Mix. "Not surprisingly, union bigwigs are out for revenge against Mr. Walker and the legislators who helped pass the Budget Repair Act." As part of its ongoing campaign to obtain vengeance and ultimately repeal the Budget Repair Act, early this year Big Labor launched petition campaigns for "recall" elections of many Senate supporters of the measure. In August, special recall elections in which pro-forced unionism candidates challenged six pro-Right to Work senators took place. Three union-label Democrat senators who had opposed Act 10, and temporarily fled the state to stop it from passing, also faced recall votes this summer. Union bigwigs and their Democratic allies pumped more than $40 million into the nine state Senate races. In the end, the unprecedentedly expensive legislative recall push by Big Labor enjoyed some success, as two of the six pro-Act 10 senators went down to defeat, while all three forced-unionism senators held on to their seats. However, the union political machine fell short of capturing the three seats it needed to relegate pro-Act 10 Senate Majority Leader Scott Fitzgerald (Juneau) to minority status and reassume control of the chamber. Democratic Mayor: Under Act 10, Milwaukee Will Save 'At Least $25 Million a Year' And that same month, Milwaukee Mayor Tom Barrett, Scott Walker's Democratic opponent in 2010 and a bitter foe of Act 10, publicly admitted that, thanks to this very legislation, his city would save "at least $25 million a year -- and potentially as much as $36 million in 2012 . . . ."