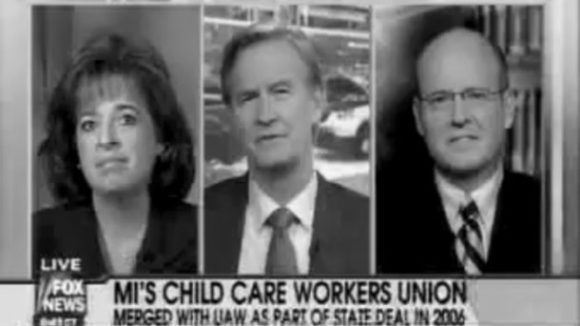 Last year, Carrie Schlaud appeared on a Fox News broadcast along with Committee President Mark Mix to discuss her and other Michigan home day-care providers' efforts to defend their Right to Work. Credit: Fox News But Union Dons May Get to Keep $4.5 Million Wrung From Providers (Source: June 2011 NRTWC Newsletter) Five years ago, bosses of two AFL-CIO unions, the United Auto Workers (UAW) and the American Federation of State, County and Municipal Employees (AFSCME), teamed up to acquire forced-unionism control over home-based day-care providers in Michigan. The UAW/AFSCME joint-venture union, known as "Child Care Providers Together Michigan" (CCPTM), was set up with the express aim of unionizing "all home-based child [day] care providers in Michigan." Then-Gov. Jennifer Granholm, a Big Labor Democrat, was ready from the beginning to pull as many strings as necessary for the CCPTM union. In July 2006, Granholm-appointed bureaucrats helped establish a shell corporation known as the "Michigan Home Based Child Care Council" (MHBCC). The sole genuine purpose of this venture was to act as the entity against which the CCPTM union was supposedly organizing. Many of the 40,500 day-care providers targeted by CCPTM organizers report that they never even heard of this outfit until after it had prevailed in a low-turnout "mail ballot" election. In 2008, forced union fees began being siphoned out of the reimbursement checks day-care providers receive from the government for serving needy families who are unable to pay their own way. With Right to Work Attorneys' Help, Michigan Home Day-Care Providers Fought Back