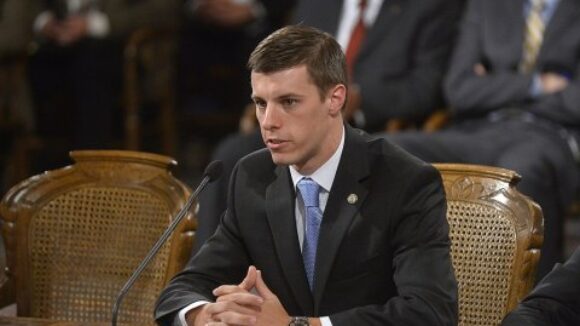 Indiana Governor Mitch Daniels, who recently caved-in to fleeing Democrat lawmakers by giving away freedom in exchange for continuing Big Labor compulsion, receives a glowing Washington Post blog post while Rush Limbaugh is dubious: RUSH: I'm just sick and tired of Democrat Party and the media picking our candidates. They picked McCain. They picked Dole. I'm tired of it. I don't care who the candidate is, I'm sick of Democrats picking them, because I know they're not gonna pick somebody that can win. That's the whole point. Headline: "Mitch Daniels: The Man Who Could Reshape the Republican Field." Okay, I think Chris Cillizza wants Obama to be reelected. I know Chris; he works at it Washington Post. Chris Cillizza is like everybody else in the main stream media: He doesn't want a conservative to be elected. So here we get a piece in the Washington Post telling us that the only chance we really have as Republicans is if Daniels is the nominee. Sorry, folks, it's the messenger here that is alerting my antennae -- and in this piece is a quasi-endorsement of Mitch Daniels from none other than Obama! What I saw Thursday night at the debate does not lead to our defeat. This story tells me it does. This story tells me that that will cause us to lose, and therefore somebody who would not have sounded that way Thursday night is the only one that can win -- and in today's case it happens to be Mitch Daniels. It's time to get serious now? Well, given the source, I read that is a giant slam. That's an insult. That is a profound insult, and I consider the source: Where is it coming from?