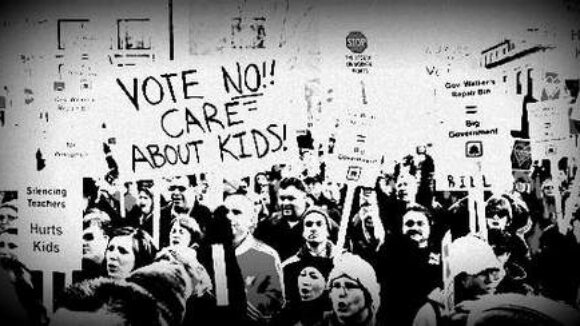 Mark Belling, radio talk show host (known nationally as an occasional substitute host for Rush Limbaugh), exposed political totalitarianism at Wisconsin’s Whitewater High School.  Documents show that specifically two educators, Kate Kolak, a Spanish teacher, and Deb Brigham-Schmull, an art teacher, wanted end Mary Taylor’s free speech.  Taylor’s supervisor, who ordered her to remove the Walker endorsement, is a signatory on a Recall Walker petition. Wisconsin teachers unions have been some of the most vociferous about recalling Gov. Walker; and they have not been shy about pour union dues in their campaign to recall the Governor. From Belling’s website: An open records request filed by me has produced records indicating at least two Whitewater High School employees, including the supervisor of custodians, requested that a private custodial worker be ordered to remove her pro-Scott Walker sign from her car in the school parking lot. The employee, Mary Taylor, says she was fired by her employer, Diversified Building Maintenance, for her refusal to remove her sign. Diversified acknowledges it sent Mary home and told her not to work the following day but says it would re-assign her to a different school. The company backed down after I reported on this two weeks ago. At the time, Whitewater District Administrator Eric Runez claimed no one from the school district directed Diversified to tell Mary to remove her sign.