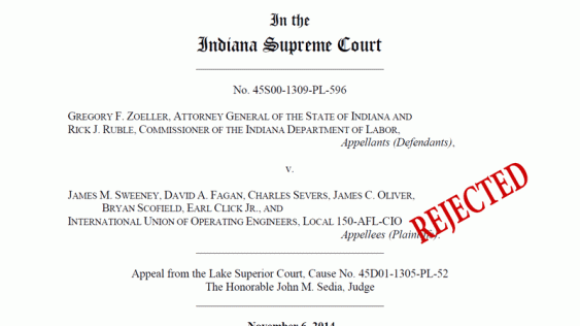 According to a November 7th headline in The Times of Northwest Indiana, “Right-to-work lawsuit could go to U.S. Supreme Court.”  Having been rejected in numerous courts in its attempt to tie-up Indiana’s Right to Work law, Big Labor continues to plot legal…

From the joint appearance by the National Right To Work Committee President Mark Mix and Indiana Right To Work Committee President ﻿Rob Beiswenger.  Mr. Mix's comments follow or his complete statement can be downloaded  by clicking this link. Thank you for coming today. I have a brief statement about the National Right to Work Committee’s joint multi-media campaign with the Indiana Right to Work Committee, and then I’ll take your questions. This $100,000 media campaign, which has been kicked off with an initial ad running this morning in the Indianapolis Star, will also include mail, phones, internet, a state-wide newspaper ad buy and hopefully TV and radio advertising. Our objective will be to urge Hoosier citizens to put pressure on Speaker Brian Bosma and Governor Mitch Daniels to use their Constitutionally-granted authority to force the Democrats to return to work and hold roll-call votes on the Indiana Right to Work Bill. More than four weeks ago, Indiana Democrats fled to Illinois to avoid voting on Right to Work because they understood if allowed to come to the floor for an up-or-down vote, the Right to Work Bill would pass and become law. The good news is, the Indiana Constitution requires legislators to legislate. And the Indiana Constitution, which requires a quorum of two-thirds, is also very clear on what to do about a walk out. Should legislators refuse to perform the jobs they were elected to do, the Indiana Constitution allows the majority party to authorize stiff fines and seek other remedies to force law-breaking legislators to return to work. Currently, Speaker Bosma is fining the Democrats who fled to Illinois a measly $350. The truth is, the Democrats know that these fines can easily be covered by the union bosses’ “special funds,” which is why they’ve done little or more than chuckle at this threat. Unless they want to continue being a laughingstock, it’s time for Speaker Bosma and Governor Daniels to start showing some backbone and force the Democrats to come back to work. To force the Democrats to come back to work, Daniels and the Republican majority should impose a $10,000 a day fine on each legislator until they return to work. If the Democrats still don’t return, the sitting legislature should take out liens on their property to force them to do the job they were elected to do. This would get the Democrats to come back to work, and the people of Indiana could get what they voted for on Election Day 2010 -- including Right to Work. The fact is, if passed, an Indiana Right to Work law would simply state that Hoosiers cannot be forced to pay dues or fees to a labor union as a condition of employment. And as the Governor has conceded in the past, forced unionism has put Indiana at an enormous disadvantage when compared to those states with Right to Work laws. The U.S. Department of Labor’s own statistics reveal that while Right to Work states were busy gaining jobs, Indiana has continued to lose them. Over the past decade, private-sector employment increased by 3.7% in Right to Work states, but fell by 8.8% here in Indiana.