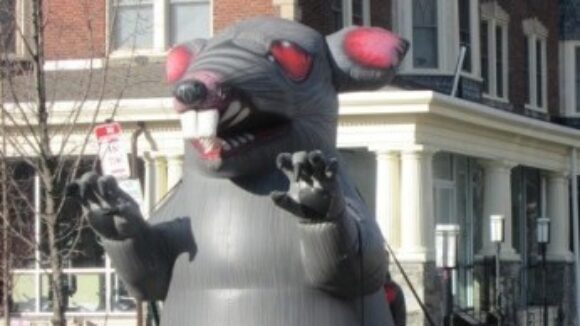 [media-credit id=7 align="alignright" width="300"][/media-credit]The Heritage Foundation examines how big labor unions are retaliating with acts of violence against a non-union construction company: Beaten workers. Blocked deliveries. Late-night vandalism. The news surrounding the Goldtex construction project in Philadelphia reads like a script for The Sopranos. What is going on? In early March, Post Brothers Construction, owned by brothers Matt and Mike Pestronk, began converting a 10-story loft building into 163 apartments. They decided to hire non-union workers—in defiance of Philadelphia’s construction trade unions, which control the city’s market. Post Brothers pays its employees well: $35–$45 an hour. But that is less than the union rate, and the jobs are going to non-union workers. So the union movement is trying to shut them down by any means necessary. They want to send the message that union members are the only source of labor in Philadelphia. Anything else issponsored by “ruthless, irresponsible developers.” The results have not been pretty. Nail “bombs”—nails welded together to puncture tires—have been thrown on the road leading to the work site. Union protestors have followed female employees and the wives of the brothers to their homes. Police arrested two protestors for allegedly assaulting a construction worker. Security cameras at the Goldtex construction site have also recorded union protestors shoving security guards,pouring oil in front of the loading dock, and blocking deliveries to the site. Post Brothers has had to spend almost $1 million on extra security.