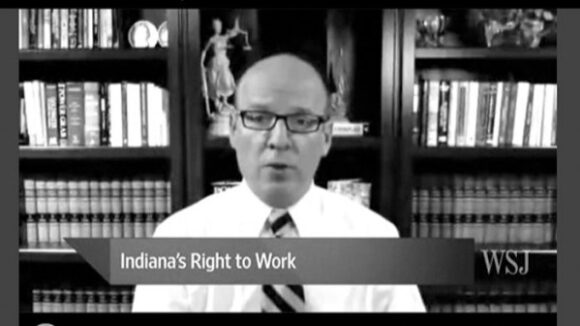 Mark Mix: "The only reason Hoosiers had to battle against the Big Labor machine for years to enact a Right to Work law is that Congress imposed forced unionism on their state . . . ." Credit: wsj.com   Indiana Right to Work Battle 'Really Resonates With Americans' (source: National Right To Work Committee February 2012 Newsletter) Hoosier legislators' approval early this year, by decisive margins in both chambers of the General Assembly, of H.B.1001, a measure making Indiana America's 23rd Right to Work state, is giving a boost to freedom-loving citizens' efforts to secure votes in the U.S. Congress on national Right to Work legislation. Wall Street Journal "Potomac Watch" columnist Kim Strassel alluded to the potential impact of a Right to Work victory in Indiana on a Fox News broadcast aired January 14, just as the battle at the state capitol in Indianapolis was heating up: "This is an issue in Indiana that really resonates with Americans . . . 'Are you going to be forced to join a union and pay dues?' Most Americans don't agree with that. If Republicans can frame that in a national debate, it definitely helps them." Bad Federal Policy Is the Reason Indiana Had to Pass a Right to Work Law Mark Mix, president of the National Right to Work Committee, later commented on Ms. Strassel's observation: "Of course, scientific surveys regularly show rank-and-file Democrats and Independents, as well as rank-and-file Republicans, overwhelmingly oppose compulsory unionism.