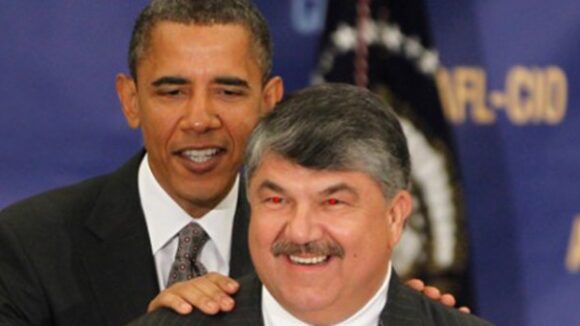 [media-credit id=7 align="alignleft" width="300"][/media-credit]Margaret Thatcher once quipped that the problem with socialism is eventually you run out of other people's money.  The same can be said for the union bosses -- after taking advantage of so many workers for so long, eventually you run out of people who want to be taken advantage of. That's why it is not surprising to see AFL-CIO union boss Richard Trumka begging students to become part of Big Labor.  Red Alert Politics reports "Trumka practically begged liberal students to join the labor movement in a speech this morning at Campus Progress’ annual national conference in Washington, D.C. 'The American labor movement truly needs you,' Trumka told attendees of the conference." They continue: Trumka tried to explain every which way to Sunday why it would benefit the college students to team up with the teamsters. The union boss even admitted that he could see why unions would turn off young people. “You probably think we’re a bunch of stodgy, old school people with outdated ideas, too interested in what’s good for us and too disinterested in what’s good for the others in our community,” said Trumka.  “And I’ll be perfectly frank with you, there’s a grain of truth to that.” Trumka admitted that unions were often seen as self-serving and as slow-to-change institutions, thus young people might not necessarily consider joining a union to be in their best interest.