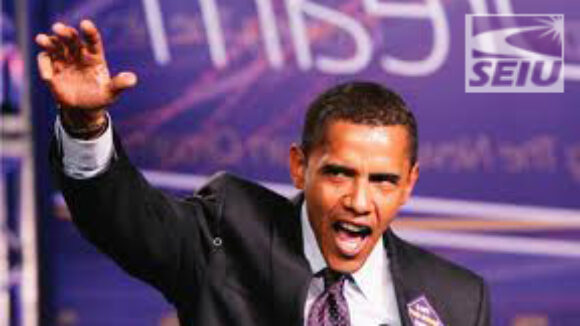 Working with the Occupy Wall Street radicals, the SEIU union bosses have created an alliance designed to destroy capitalism. Breitbart.com has received exclusive tape of an Occupy Strategy Session at New York University, billed as a group talk on “The Abolition of Capitalism.” One of the headline speakers at this session was Stephen Lerner, former leader and International Board Member of the SEIU and frequent Obama White House visitor. Lerner argued in favor of people not paying their mortgages and “occupying” their homes; he spoke in favor of invading annual shareholders meetings to shut them down. But his big goal was to get workers to shut down their workplaces. That’s where the SEIU agenda and the Occupy agenda truly meet: once workers begin to occupy. Here are the relevant portions of the transcript: Let me just throw out a couple ideas here. One, I think a theme here that’s really important is Occupy Homes as a key part of the stew in multiple spheres. There’s eviction defense, there’s folks who are moving back into homes that they were evicted from that have been sitting empty, there’s community organizing, there’s a fight with Fannie and Freddie, but this notion that millions of people are losing their homes and we can physically help them save it, very important … This second question, this question of moving money, which has mainly been an individual act so far, you know, move your account out of a bank, getting institutions, schools, universities, school boards, to move money out of banks as a way to put them into either credit unions or things that do economic development, it captures both what is wrong with finance capital, but then it’s something everybody can do … In fact, it’s infused by the energy of somebody that just got thrown in jail for trying to keep their home … But here’s the real crux of the matter: How do we give workers the confidence? … How do we create a mood in the nation where we’re occupying our workplaces, where we’re shutting down our workplaces? … Where workers are sitting in, where workers are shutting down their places of work, and when the police come, when the injunctions come, we’re all there with them, so we can really deal with part of the reason that the economy’s so screwed up … which is a few people have got all the power. Think stew, think hope, death to the Stockholm Syndrome!

The Fiscal Times' Liz Peeks investigates how union budgets have busted state budgets and asks "Is it possible that the real divide in the United States today is between unions and… everybody else?." The answer, unfortunately for taxpayers, is yes. From Bloated Union Contracts Have Busted State Budgets: Consider the issues making headlines: education reform, busted state budgets, the battle to recall Wisconsin Governor Scott Walker, free trade agreements,Occupy Wall Street, the fight to make Indiana a right-to-work state. What these stories have in common is the waning influence of organized labor and the all-out battle by union leaders to hold on. Take the Obama Administration’s Race to the Top initiative. Education Secretary Duncan recently warned that several states, including New York, might not receive monies earlier awarded through that program because they have not followed through on required reforms. The stumbling block? Teacher evaluations. New York City Mayor Michael Bloomberg laid out new education initiatives in his recent State of the City address, among them a proposal to give $20,000 raises to the best teachers, in return for changing the way educators are evaluated. Today, teachers are rated either satisfactory or unsatisfactory; 97 percent fall in the former category. UFT President Michael Mulgrew immediately denounced the plan, describing Mr. Bloomberg as “lost in his own fantasy world of education.” Mr. Mulgrew may be the one living in a fantasy world. Pressure to boost our country’s public schools is one of the rare priorities on both Republicans’ and Democrats’ to-do lists. Americans are appalled by our plummeting world education rankings, and by our graduates’ lack of preparedness for today’s job market. While the decline in our schools stems from a number of sources, most reformers – including Secretary Duncan – see the intransigence of unions on the “job for life” rules that perpetuate mediocre teaching as a major roadblock to progress. Likewise, the recession has forced politicians to confront bloated public employee contracts that have torpedoed many states’ budgets. Estimated at over $3 trillion, the underfunding of state and local pension plans has been described as one of our most serious fiscal problems. Voters now understand that unless elected officials overhaul pay and benefits packages they will face soaring taxes or reduced services.

Shocked? Not So Much

Stephen Lerner, the SEIU boss who left the union and now advocates economic war on the USA, is still on the payroll of the SEIU! Is anyone really shocked?…

'Former SEIU' Boss Floats Plan to Crash the Economy. But it is a “Worker Friendly” Plan

Ex-SEIU union operative Steve Lerner, is pushing a plan to crash the economy and redistribute the wealth.

'Former SEIU' Boss Floats Plan to Crash the Economy. But it is a “Worker Friendly” Plan

Ex-SEIU union operative Steve Lerner, is pushing a plan to crash the economy and redistribute the wealth.