On this Labor Day, as our country strives to reopen and recover, we should all remember the sacrifices that America’s working men and women – including shelf stockers, delivery drivers, nurses, and other frontline workers – continue to make so our country can get through these uniquely challenging times. Many will pay lip service to honoring workers, but it will ring hollow absent a commitment to respect workers’ individual rights and trust each worker to decide for themselves what private organizations, including labor unions, to associate with or subsidize.

Thankfully, in the past decade America’s workers have seen significant advances in that field. The United States Supreme Court’s 2018 decision in Janus v. AFSCME, argued and won by National Right to Work Foundation staff attorneys, safeguarded the First Amendment right of every public worker to choose for themselves whether or not to fund a labor union. And since 2012, five new states have enacted Right to Work laws – meaning a majority of states now protect that same fundamental freedom for private sector workers. Not since the 1950s have we seen such a large expansion of state Right to Work laws in one decade.

Meanwhile, at the urging of workers represented by Foundation staff attorneys, the National Labor Relations Board continues to eliminate policies that trap workers in unwanted union ranks for months or even years, even when an overwhelming majority wants the union out of their workplace. These are significant advances in employee freedom, but there remains much more to do.

Millions of Americans can still be fired for refusing to pay union bosses they don’t want and never asked for. Plus, even where the law protects workers from forced union dues it often takes vigilant legal enforcement to get union officials to respect those rights. Meanwhile millions more American workers are forced to accept the one-size-fits-all “representation” of these union bosses, even if they think they would be better off without it.

And Big Labor’s top officials in their shiny multi-million-dollar headquarters continue to double down on compulsion. Instead of earning the voluntary support of those whom they claim to represent like private organizations, union bosses continue to look to government to grant them more special powers to compel workers to associate with unions against their will.

This is especially demonstrated by the overwhelming forced-dues-funded support from top union bosses for Joe Biden, whose platform includes wiping out every state Right to Work law by federal fiat, authorizing federal bureaucrats to impose forced dues contracts over the objections of both businesses and individual workers, and by mandating the abuse-prone “card check” process so union bosses can corral millions of workers into unions without even a secret-ballot vote.

But the American people know this is not the future workers want or deserve – they overwhelmingly agree with the Right to Work principle that no employee should be forced to join or support a union as a condition of keeping their jobs.

So this Labor Day, and come November, think back to the hardworking individuals who served you throughout the pandemic and remember: They deserve a choice. Let’s celebrate American workers by being vigilant for attempts to undercut their freedoms. 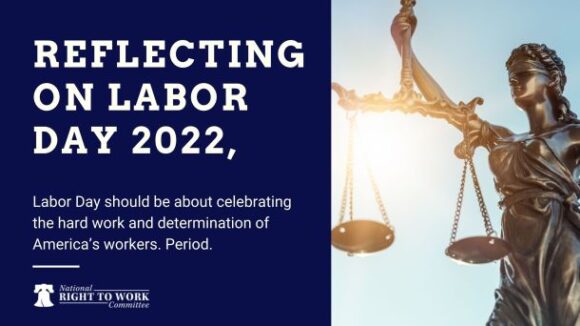 Major Investments are Happening in Right to Work Alabama