When asked, 72% of public and private sector union members believe that union officials should be held more accountable according to a recent National Right To Work Legal Defense Foundation – Frank Luntz poll.   Yet, union bosses have coordinated to repeal, rescind, and weaken union officer conflict-of-interest disclosures and union financial reporting. 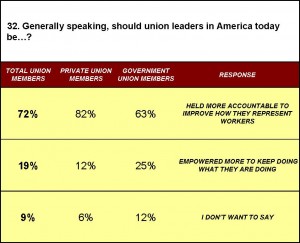