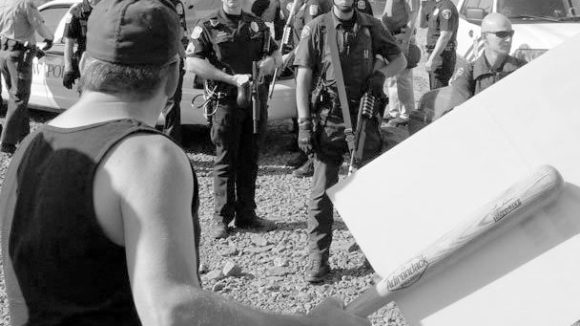 In southwestern Washington last month, overpowered police were unable to prevent bat- and ax handle-wielding union toughs from systematically sabotaging a $200 million grain terminal. No arrests were made at the scene. Credit: AP Photo/Don Ryan Bat- and Pipe-Wielding Union Thugs Rampage in Washington State (Source: October 2011 NRTWC Newsletter) For decades, Right to Work advocates have fought to close the judicially created loophole in federal anti-extortion law that exempts threats, vandalism and violence perpetrated to secure so-called "legitimate union objectives," including monopoly-bargaining and forced-dues privileges over employees. In explaining the importance of closing the loophole created 38 years ago in the U.S. Supreme Court's controversial 5-4 Enmons decision, National Right to Work Committee spokesmen and their allies have pointed out, time and again, that local and state law enforcement are often overwhelmed by violent union conspiracies. Just last month, the local police in Longview, Wash., a Columbia River port town, became the latest case in point. At 4:30 AM on September 8, hundreds of International Longshore and Warehouse Union (ILWU/AFL-CIO) militants stormed a new grain terminal at the Port of Longview. Big Labor thugs broke down the gates, overwhelmed six security guards, and then converged on the terminal of EGT, a joint venture of U.S., Japanese, and South Korean companies that has been targeted by ILWU chiefs. A week later, security guard Charlie Cadwell testified before U.S. District Judge Ronald Leighton that every ILWU "protester" he saw that night was carrying a baseball bat, lead pipe, garden tool, or other weapon. As the AP reported, Mr. Cadwell told the judge he was first pulled out of his car by one Big Labor zealot, then another swung a metal pipe at him. "I told him," Mr. Cadwell continued, "You have 50 cameras on you, and law enforcement is on its way. He said, '(Expletive) you. We're not here for you; we're here for the train.'" Meanwhile, yet another union militant drove off with his car and eventually ran it into a ditch. Mr. Cadwell said "about 40 to 50 people were throwing rocks at him, and that he was hit between his eyes and in his knee," according to the AP account. 'I Wasn't About' to Stop 'These People From Doing Whatever It Is They Were Going to Do' The ILWU lawbreakers in Washington State evidently feel no more compunction about using threats and violence against police than they do about assaulting and terrorizing security guards.

So Much for Job Creation -- Pelosi, "Yes" Obama NLRB Should Shut Down Boeing's SC Plant

You can say one thing about Nancy Pelosi, when it comes to loyalty to the union bosses, there is no hesitation. When asked whether Boeing should shut down its South Carolina facility because it is not unionized, Pelosi told CNBC…

So Much for Job Creation -- Pelosi, "Yes" Obama NLRB Should Shut Down Boeing's SC Plant

You can say one thing about Nancy Pelosi, when it comes to loyalty to the union bosses, there is no hesitation. When asked whether Boeing should shut down its South Carolina facility because it is not unionized, Pelosi told CNBC… 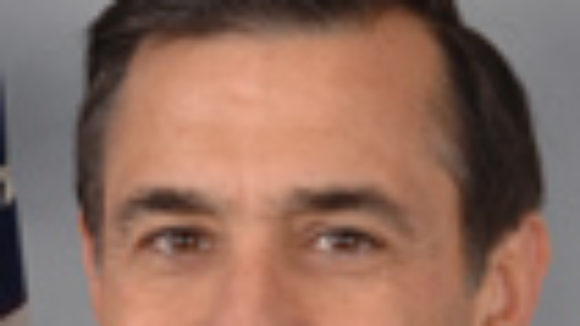 House Government Oversight Committee Chairman Darrell Issa (R-CA) accused the National Labor Relations Board of being a “rogue agency” in a letter to its general counsel Monday. The chairman claimed the NLRB knowingly withheld damaging documents relating to his committee’s probe of the agency’s controversial Boeing complaint, the Investors Business Daily Reports: Issa was referring to a cache of emails obtained earlier this month by the watchdog group Judicial Watch through the Freedom of Information Act. He expressed anger that the emails were not turned over to his committee first and said the messages demonstrated the agency’s lack of impartiality. He further alleged that some of them contradicted claims NLRB staffers made as part of his committee’s probe. NLRB spokeswoman Nancy Cleland said the agency had not withheld the emails. She said that the committee’s requests and the FOIA requests that produced the emails were handled separately by different people and that caused confusion. “Because the documents were being produced on separate tracks, the Committee had not yet received some materials at the time they were provided to Judicial Watch. It is the Agency’s intent to provide those materials as part of its next, and fourth, delivery of documents later this week,” Cleland said in a statement to IBD, adding that in the future the committee requests will be given priority over FOIA requests. The 505 pages of emails do not contain especially startling revelations. For the most part, the NLRB staffers appear to be very circumspect in their messages to each other. There are several redacted sections, most citing FOIA exceptions for privacy and attorney work product. Nevertheless in several cases NLRB staffers do offer some personal commentary on the Boeing case and the effect is not unlike listening in at the watercooler. Those messages show the staff to be enthused at the prospect of bringing the aerospace giant to heel and disdainful of their critics on the case. At the time of the Boeing case, its chairwoman was Wilma Liebman, a former Teamsters lawyer. Obama had also appointed former Service Employees International Union lawyer Craig Becker to the five-member board. Only one board member was a Republican.“The unprecedented NLRB decision to attack Boeing seemed abusive on its face and cried out for further investigation. And we suspected it was done at the behest of union interests and not the public interest. The pro-union email traffic we uncovered confirm this,” said Judicial Watch President Tom Fitton, in an email to IBD. NLRB attorney, John Mantz, forwarded Willen a link to a Wall Street Journal op-ed by South Carolina Gov. Nikki Haley. The GOP governor was criticizing Obama and his “union-beholden appointees at the National Labor Relations Board” for launching “a direct assault on the 22 right-to-work states across America.”“Deb, have you seen this?” Mantz wrote. Willen didn’t apparently respond, but did forward the link to another attorney, Jayme Sophir, who gave a one-word response: “Ugh.”

Ignoring a court order, teacher’s unions in Tacoma, Washington have refused to return to the classroom.  Contempt-of-court notices were mailed out this week to the roughly 1,900 teachers in the Tacoma School District who were found on Friday by Pierce… 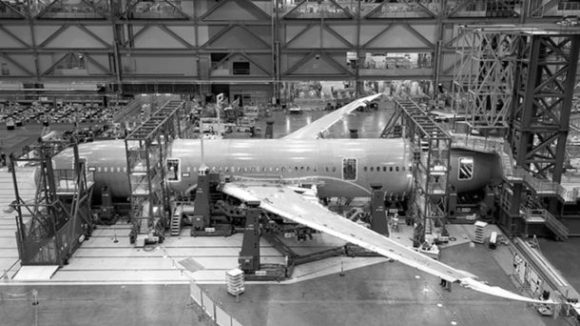