Just how desperate is Big Labor? The union bosses from the Washington State have filed an ethics complaint against South Carolina Sen. Lindsay Graham for “pressuring” the National Labor Relations Board into dropping its ill-founded complaint against they company whose… 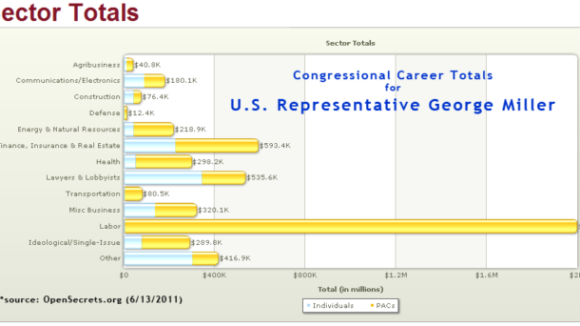 What do those fighting back criticism of the National Labor Relations Board (NLRB) have in common? Most are fueled by political contributions from union bosses. The Hill newspaper…

Right To Work freedom strongly linked to economic prosperity explains Vincent Vernuccio in his Townhall post: The NLRB’s complaint is in fact a back-handed compliment to right-to-work laws, because it is based on the assumption that right-to-work laws help attract businesses. The preponderance of the evidence favors that position. As Arthur B. Laffer and Stephen Moore recently noted in the Wall Street Journal, from 2000 to 2009 right-to-work states “grew faster in nearly every respect than their union-shop counterparts: 54.6% versus 41.1% in gross state product, 53.3% versus 40.6% in personal income, 11.9% versus 6.1% in population, and 4.1% versus -0.6% in payrolls.” A recent analysis by the office of Senator Jim DeMint (R-S.C.) shows that right-to-work states created 1.3 million more jobs in the private sector, had 3.5 percent faster income growth, and 46 percent higher business growth than forced union states between 1993 and 2009. And, according to a recent National Right to Work Committee analysis of Department of Labor data, over the past 10 years, the top five states in creating new jobs are right-to-work states, while the bottom five are forced unionism states. Workers in right-to-work states also have more disposable income than those in forced unionism states. In right-to-work states, unions must demonstrate to workers that their service has value or they will refuse to join. As in other areas of the economy, competition makes providers of goods and services—in this case the representation services of labor organizations—more efficient and responsive.

From the National Right To Work Legal Defense Foundation: Machinist union bosses join with NLRB Acting General Counsel to tell workers to “sit down and shut up” about losing their jobs Washington, DC (June 8, 2011) – Yesterday, Acting General Counsel Lafe Solomon, International Association of Machinist (IAM) union lawyers, and Boeing Corp. (NYSE: BA) attorneys responded to a motion filed by three North Charleston Boeing employees seeking to intervene in the National Labor Relations Board’s (NLRB) case against Boeing. The North Charleston employees are receiving free legal assistance from the National Right to Work Legal Defense Foundation. The NLRB’s complaint, if successful, would almost certainly eliminate thousands of jobs in South Carolina, including those of the three Boeing workers represented by Foundation attorneys. Foundation President Mark Mix released the following statement in response to the Acting General Counsel’s and IAM union lawyers’ opposition to the employees’ motion: “Acting General Counsel Solomon’s and the IAM union lawyers’ opposition to the Charleston employees’ motion to intervene in the NLRB’s persecution of Boeing is a slap in the face of all independent-minded American workers and citizens who support duly-enacted Right to Work laws in their states that protect employees’ choice over whether or not to financially support a union.