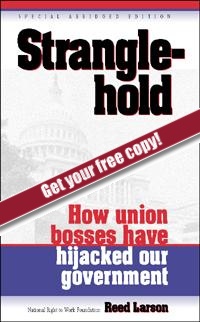 From the book Stranglehold by Reed Larson:

While many people believe compulsory unionism began during Franklin D. Roosevelt’s term, the foundation was actually laid with the RLA and other bills signed during earlier administrations.

President Hoover signed Norris-LaGuardia in the dark days of the Depression and during his last days in office, having just been defeated for re-election by FDR.  With the election of Roosevelt (who campaigned and won on a vague agenda of taking “action” to stem the economic crisis), Big Labor had a president ready and willing to make landscape changes in labor law.

Indeed, his administration was characterized by action.  And with Congress acting more like a “rubber stamp,” Big Labor was the top beneficiary.   One example of this rubber-stamp Congress was the Emergency Banking Relief bill, the first to come up in the special session called by the new president.  On the same day President Roosevelt had the bill introduced, the House of Representatives passed it unanimously without a roll call vote.  By 7:30 that evening the Senate approved it.

What came out of this rubber-stamp Congress was New Deal legislation not tested against the Constitution, designed to give more power to the federal government and Big Labor.  As a result, the Supreme Court swung into action with a flurry of decisions overturning New Deal laws.

The first major Big-Labor payoff of the New Deal to come before the Supreme Court was the National Industrial Recovery Act (NIRA) of 1933, a “system of industry codes or cartel agreements, sanctioned by the government” to raise prices throughout the economy.[i]  In addition, in NIRA Section 7 (a) the government gave Big Labor increased power by promoting policies of compulsory unionism.  It also trampled the rights of workers.  At issue before the Court was whether or not a person could be in control of individual contracts (specifically labor) lower than the government’s mandated price.

In 1935, the Supreme Court ruled on the matter in Schechter Poultry Corp. v. United States.  Although Big Labor, President Roosevelt and Congress saw New Deal legislation as necessary due to the national emergency of the Great Depression, the High Court saw it differently.  In Schechter, the High Court ruled unanimously to overturn the NIRA because

[t]he effect, in respect to wages and hours, is to subject the dissenting minority… to the will of the stated majority… To ‘accept’ in these circumstances, is not to exercise choice, but to surrender to force.

The power conferred upon the majority is, in effect, the power to regulate the affairs of an unwilling minority.  This is legislative delegation in its most obnoxious form; for it is not even delegation to an official or an official body… but to private persons… [A] statute which attempts to confer such power undertakes an intolerable and unconstitutional interference with personal liberty and private property.  The delegation is so clearly arbitrary, and so clearly a denial of rights safeguarded by the due process clause of the Fifth Amendment, that it is unnecessary to do more than refer to decisions of this Court which foreclose the question. [ii]

The Court took a clear stand.  But desperate to give their Big Labor masters more power, Congress quickly rewrote NIRA Section 7(a) into what would be the Wagner Act — or the National Labor Relations Act.  President Roosevelt signed it in July of 1935.

The stakes were high.  The NLRA was the most significant piece of labor law in American history.  Its main purpose was to make it easy for Big Labor to herd unwilling employees and businesses in the private sector into monopoly bargaining contracts.  The three key components of compulsory unionism passed in the Act were “exclusive representation,” “union security,” and “mandatory bargaining in good faith.”[iii]

Now, workers could either be forced to “join” a union and pay full union dues (closed shop) just to get or keep a job.  With the NLRA, union bosses not only had the law stacked in their favor, but also gained a semi-administrative, semi-judicial agency called the National Labor Relations Board (NLRB) in the U.S. Government to implement their new compulsory powers.  The NLRB enforced the NLRA’s main features, which included:

This political board (stacked by President Roosevelt with pro-union-boss cronies) was Big Labor’s branch of the executive and judicial government.

In 1936 Roosevelt scored a landslide reelection victory, garnering 523 electoral votes to Republican Alf Landon’s 8.  Roosevelt’s Democrats won 80% of the House of Representatives and 75% of the Senate.

But the Supreme Court still stood in the way.  Despite this super-majority and added ability to impeach the justices (if all the Democrats obeyed Roosevelt’s commands) the Supreme Court again defied Roosevelt’s threat and his New Deal power grabs in Carter v. Carter Coal Co. (1936), decided just after the election.  The High Court ruled the Bituminous Coal Conservation Act (BCCA) of 1935 unconstitutional because of its labor provisions  and struck down the BCCA for precisely the same kind of grant of coercive power as in Schechter.[v]

FDR knew if the same arguments in Schechter and Carter were used in an NLRA case, the NLRA would also be overturned.  Flush with his landslide victory, President Roosevelt went on the offensive against the Supreme Court — just as he had done with previous political enemies.

Roosevelt had a piece of Court-packing legislation secretly written in the White House and quickly transmitted to Congress. Then, as part of a 1-2 punch, Roosevelt delivered a national radio address on the issue just before the Court heard oral arguments in NLRB v. Jones and Laughlin Steel Corporation (1937) — the case that would determine the fate of the NLRA.[vi]

The Court and the rest of America heard his message loud and clear.  For Roosevelt and his Big Labor masters, the real prize was the National Labor Relations Act.  If the Act was overturned, it would spell disaster for Big Labor’s designs to seize control of American workers.

This time, the Supreme Court backed Roosevelt’s schemes.  Scholars widely believe that two justices, Chief Justice Hughes and Associate Justice Roberts, were sufficiently intimidated by Roosevelt’s Court-packing threat to switch their votes from 6-3 against Roosevelt in Carter to 5-4 for Roosevelt in Jones and Laughlin.[viii]

As a result, when the Supreme Court voted 5-4 in April of 1937 to uphold the NLRA, it was forever dubbed the “switch in time that saved nine.”[ix]

The leaps of logic made by the Supreme Court were astonishing.  In fact, the High Court held that under “exclusive representation” workers were free to enter into independent contracts with an employer; therefore the NLRA was constitutional.  But the Court failed to explain the contradiction of “exclusive representation” which did not incorporate every worker.  The Court also “dismissed without explanation”[x] the legal argument that it was constitutional for the federal government to delegate legislative power to private groups.  The Court declared the precedents of Schechter and Carter were “not controlling here.” [xi]

Soon after, Roosevelt’s Court-packing legislation quietly died in Congress.  Within four years of the historic “switch in time,” death and resignation took away the Court’s strict constructionists.  In fact, Roosevelt got to replace seven of the Supreme Court’s nine Justices during his administration.  The old Court was replaced with New Dealers who upheld the new legislation.  With this New Deal Court in place, no major labor law case was brought up and won by pro-freedom employees for decades.

Now, Big Labor had untapped power at its disposal, passed by Congress, signed by the president, and approved by the Supreme Court.  Union officials wasted no time grabbing power over workers and filling their coffers with forced dues.  Union membership skyrocketed from 2.8 million in 1933 to 8.4 million in 1941.  By 1952, membership peaked at 25.2% of the civilian labor force — over 16 million workers.[xii]

Americans rose in outrage at these “unreasonable demands on private industry and government.” [xiv]  Consequently, in 1947 a newly-elected Republican Congress passed the Taft-Hartley Act, amending the NLRA in 1947 over President Truman’s veto.  The Taft-Hartley Act changed the law so that:

While the Taft-Hartley Act was another misguided expansion of federal influence in the private sector workforce, it did affirm the states’ ability to pass Right to Work laws.  Right to Work laws establish the principle that a worker cannot be forced to join a union or pay union dues against his or her will.  By 1965, 19 states passed Right to Work laws or secured this protection in their state constitution.  Today, 26 states have Right to Work protection for their citizens.[xv]

It was widely held that passage of Taft-Hartley was a setback for Big Labor.  In reality, union bosses actually gained a partial victory.  The major problem with Taft-Hartley is that it did not return the law to the pre-New Deal standard.  It continued to allow workers to be told by government that they must “accept” monopoly bargaining — thereby surrendering their individual right to negotiate with their employers on their own behalf — to get or keep a job, and it forced workers to pay union dues or fees against their will in non-Right to Work states.  Taft-Hartley would continue to allow Big Labor abuses, just not as many as before.  Private sector unions would continue to grow to an unprecedented size even after passage of Taft-Hartley.

If Taft-Hartley was a partial Big Labor victory, the victory which followed it was complete.  Big Labor successfully amended the RLA in 1951 so both the RLA and the NLRA paralleled each other in their sanction of forcing employees to pay union dues.