Salting & the Truth In Employment Act 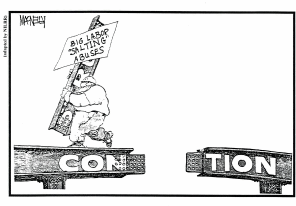 “Salting” is an organized conspiracy on the part of Big Labor bosses, aided and abetted by the pro-forced-unionism dominated National Labor Relations Board (NLRB), to obtain access to forced-dues dollars from non-union workers by destabilizing non-union workforces from within.The term “salting” refers to union organizers applying for jobs with non-union employers with the aim of organizing the employers’ workforce. Or, more frequently, triggering an unfair labor practice charge that will result in heavy back-pay costs to the target employer and a NLRB cease and desist order that will weaken the target employer’s ability to fight future organizing efforts. “Salts” are union organizers, not workers.

“Salting” is an underhanded method of intimidation designed by Big Labor bosses to blackmail employers into handing loyal employees over to union officials without the employees’ consent.