We will not forget!

(2/6/2020) Today, National Right to Work Committee President Mark Mix blasted Nancy Pelosi and the rest of Big Labor’s allies in Congress for passing H.R. 2474, the so-called “PRO Act,” which would wipe out all 27 state Right to Work laws, let Big Labor organize unions without a secret ballot vote, and impose a laundry list of other union boss power grabs.

Mr. Mix stated, “This was a vote to let the union bosses put their hands back in workers’ pockets. Every member of Congress who voted for this abomination should be ashamed of themselves.”

“80% of Americans agree it is just plain wrong to force workers to pay union dues or ‘fees’ just to get or keep a job. But these politicians shamelessly kowtowed to the demands of the union bosses who fund their campaigns with forced-dues dollars,” Mr. Mix continued.

Right to work laws have been part of the economic landscape for more than seventy years.

In 1935, Congress gave Big Labor the power to force employees to accept their so-called “exclusive representation,” where it is against the law for the workers to represent themselves.

Then, compounding the injury to independent-minded workers, they allowed union bosses to demand that workers pay for that “representation” they don’t want, didn’t ask for, and which may even be working against their interests.

In 1947, Congress allowed states to pass Right to Work laws, partially righting this wrong within their own borders.

Mr. Mix pointed out that “state Right to Work laws have brought tremendous economic benefits to the states that adopted them.”

Most business relocation consultants admit that as many as half of their clients, when considering where to relocate or expand their businesses, immediately strike non-Right to Work states off the list, not even giving them a chance to compete.

That’s why, according to Mr. Mix, “Wiping out state Right to Work laws just gives companies one more reason to move their operations overseas.”

In addition, Mr. Mix noted that Right to Work laws provide a critical layer of accountability to union leadership.

“When union bosses can force people to pay dues or ‘fees,’ they don’t have to worry about what those people want or need,” declared Mr. Mix.

“Often, the only thing the union bosses end up caring about is how much money they can collect, and how lavishly they can spend it on their own comfort and on the politicians they keep in their hip pockets,” Mr. Mix continued.

H.R. 2474 would change all that, by giving Big Labor the power to collect forced dues, regardless of whether or not a state Right to Work law is in place.

Mr. Mix called on Right to Work supporters to make their voices heard, and to “call every politician who voted for this massive Big Labor power grab, and demand an apology for their vote to bring back the shackles of forced unionism across the country.” 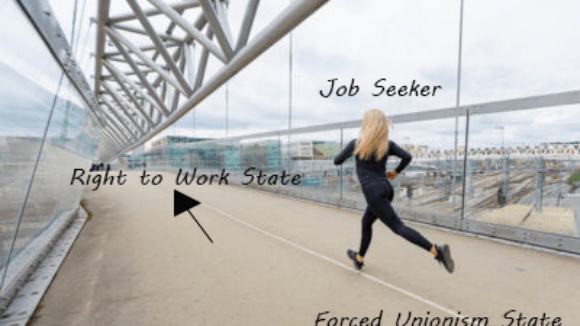 “One key message the Committee is sending to Virginia candidates [...] is: ‘Don’t reward Big Labor for shuttered schools.’"