With every passing day, it seems, union bosses are decrying more loudly the signal legislative achievement of the President they played a critical role in electing in 2008 and reelecting in 2012.

In a commentary for Forbes this week (see the link below), health-care policy analyst Avik Roy quotes extensively from a July 11 letter, jointly written by three officials of large international unions, regarding the “nightmare scenarios” that will soon be brought about by the so-called Affordable Care Act of 2010, otherwise known as ObamaCare, unless it is repealed or completely rewritten.

If the law is allowed  to stand as it is, the three union officials bluntly predict, it will “destroy the very health and wellbeing of our members along with millions of other hardworking Americans.”

Of course, it was Hoffa, Hansen and Taylor, along with other top union bosses, who spent a billion dollars or more , mostly money from forced dues-laden union treasuries, to make Barack Obama President and elect a Congress that would rubber-stamp his agenda in 2008.  And it was Big Labor that spent vast additional sums of forced-dues money on lobbying efforts to ensure ObamaCare would be enacted in 2010 despite intense public opposition.  And it was the union hierarchy that again dug deep into its forced-dues treasuries to prevent ObamaCare’s repeal by getting the Obama-Biden ticket reelected in 2012.

To workers who pay must pay forced dues to the Teamsters, the UFCW, UNITE-HERE or other big unions in order to keep their jobs, it can’t be very reassuring to hear top union bosses now admit, effectively, that they “represented” forced-dues payers very poorly on a major issue from 2008 to 2012.

Rather than count on Hoffa, Hansen and Taylor to repair the damage they largely did themselves, more and more unionized workers want to be able to exercise the option to cut off all financial support for people who are responsible for “shatter[ing] . . . hard-earned health benefits . . . [and] destroy[ing] the 40 hour work week that is the backbone of the American middle class.”  To do that, of course, unionized employees need the protection of Right to Work laws. 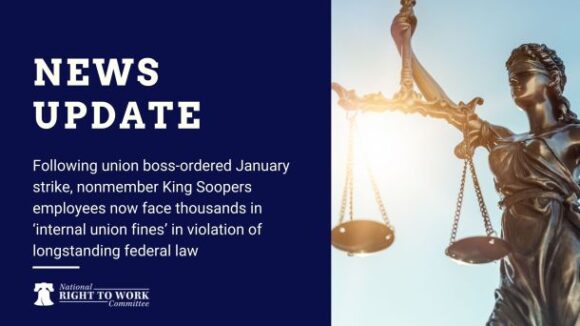