Teamsters’ Boss Jimmy Hoffa is asking for a federal bailout of union pensions. According to Hoffa: “The failure and weakening of major financial institutions in the last weeks and months has the potential to destroy the foundation of many pension funds.”

According to The Wall Street Journal:

The Teamsters and other unions want the government to forgo penalties and give companies an extension to meet pension funding requirements. Without the change, unions say companies could be forced to cut pension benefits or negotiate concessions on wages or other benefits to make up for increased funding for pensions.

The Teamster’s $24 billion Central States Fund, which covers workers in 25 states, lost $3 billion in assets in the first six months of this year, according to Ken Paff, national organizer for Teamsters for a Democratic Union, an activist group that closely tracks the union’s pension funds. “They’ve clearly lost more since,” says Mr. Paff, who doesn’t have figures for the past two weeks.

A spokesman for the fund, which is jointly administered by union and employer representatives, couldn’t be reached to comment. Leigh Strope, a Teamster spokeswoman, said 1.5 million active and retired union members are covered by 200 multiemployer pension plans with $75 billion in assets. “The funds are down just like all portfolios across the board,” she said. “That’s why we’re asking for relief from Congress.”

It’s unbelievable that Big Labor bosses, who have no problem spending close to a billion dollars this year for political campaigns and ads, nonetheless, see no problem in asking taxpayers for a bailout. 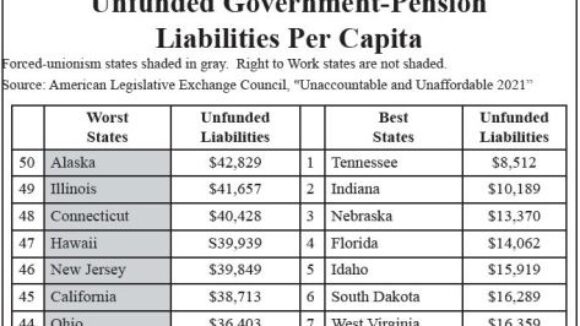