Despite decades of failure in our public school, the union bosses who run the teachers union don’t take criticism real well.  A union funded front group are villifying a new movie “about the brutal retaliation of a teachers union against a teacher and a single mother has inspired real-life union vilification of the movie and a campaign against entertainers who have anything to do with it,” Margert Eagan reports:

[/media-credit]“Won’t Back Down” tells the story of a teacher (Viola Davis) and a single mother (Maggie Gyllenhaal) who battle to oust the union in a poor, failing Pittsburgh school. Produced by Walden Media, it’s an emotional roller coaster aimed at mainstream audiences unlike “Waiting for Superman,” Walden’s previous anti-union and much-heralded documentary.

“The basic question the film asks is what you would do if your daughter was trapped in a failing school,” said Walden co-founder Michael Flaherty yesterday in his Burlington office. But instead of actually responding, he said, critics anxious to maintain the status quo “are a lot more interested in intimidation and the politics of personal destruction.”

In real life, Parents Across America, an advocacy group which has received union funding, has launched a “fight Hollywood” campaign asking members to contact entertainers at all involved with the film or even a summer concert to kick it off. The intent, according to its website, which lists phone numbers and emails of agents and publicists, is to brand the film as a “feel bad, not feel good” movie. On their list: Davis and Gyllenhaal, plus Meryl Streep, Morgan Freeman, Jack Black, the Foo Fighters’ Dave Grohl, Maroon 5’s Adam Levine and Josh Groban.

One industry source yesterday confirmed reports that the Screen Actors union president was asked by union officials to warn the movie’s stars about union bashing. On the “Today” show Monday, after protests at the premiere, Gyllenhaal went out of her way to say she’s not a union basher.

Meanwhile the American Federation of Teachers’ president, Randi Weingarten, has denounced the movie for “using the most blatant stereotypes.” She has a point: Gyllenhaal’s fictional child’s teacher is a heartless monster. But when Weingarten falls back on blatant stereotypes herself, blaming growing anti-union sentiment on right wing cabals, she loses credibility. Numerous Democrats, despite all that teachers union funding, are now also pushing back, including Los Angeles Mayor Antonio Villaraigosa, who just chaired the Democratic National Convention, and Obama’s education secretary, Arnie Duncan.

But this isn’t just about Hollywood. Right here in Boston, City Councilor John Connolly says he’s “hugely frustrated with the pace of change,” irate Boston’s new teachers’ contract was settled “without adding a single minute to our short school day.” Connolly said his own child’s school, the Trotter, was “at the bottom of the barrel four years ago.” But now it’s a so-called “turnaround school” with longer days, where principals can actually hire teachers they want. The difference, said Connolly, is miraculous. Now, that sounds like the makings of a feel-good movie.

“The PERB should condemn these attacks on independent-minded teachers, and allow Gompers educators to have their long-overdue vote on whether to remove the union officials who are attacking the very educators they claim to represent,” added Mix. 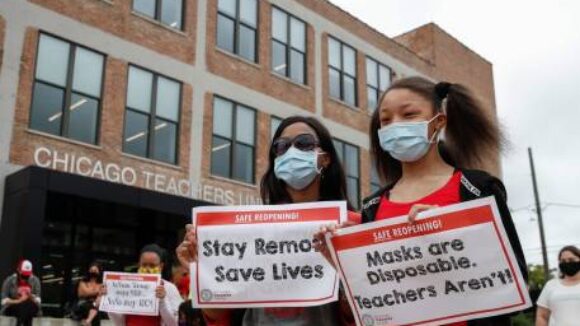 How Does Right to Work Support Education and Learning?

There is concern over the lowered access to in-person learning and education during COVID-19. However, the issues are deeper than that.