Right to Work States and the Card Check Scam Bill

We have been warning readers for years that enactment of the Card Check Scam Bill — certainly a top agenda item for a Democrat Congress and a Democrat president — will have a negative impact on Right to Work states, and more people are starting to recognize that fact.

The Birmingham Business Journal takes a look at the possible impact the so-called Employee Free Choice Act will have on Alabama employers:

The proposed bill, often referred to as card check legislation, would take away the right of the employer to demand a secret ballot when more than 30 percent of its employees petition in favor of union participation. If the petition is declared valid, the union would then be certified as the exclusive representative of all the company’s employees.

The bill also proposes federal mediation if a unionized company and a union can’t agree upon a collective bargaining contract within 120 days.

The concern for businesses is that unions might use pressure to push employees into union membership and that they won’t understand the ramifications, like the union bargaining exclusively for all employees, said Jay St. Clair of labor and employment law firm Littler Mendelson PC in Birmingham.

“The concern is that there can be coercion and people can’t vote their true feelings,” he said. “It does away with the fundamental process (secret ballot) that has been in law since 1930 and a process we’re all familiar with and have endorsed for 70 years.”

And in Virginia, where former Democrat Gov. Mark Warner is running for the Senate, Warner refuses to say that he will vote against the Card Check Scam Bill — a fact that has the Harrisonburg Daily News-Record rightfully up in arms:

As the polls repeatedly tell us, former Gov. Mark Warner makes an appealing candidate for U.S. Senate. But a recent refusal to commit, up or down, on an issue critical to many Virginia voters, in our mind, diminishes this appeal.

The issue to which we refer is the proposed Employee Free Choice Act, which would, in essence, replace the secret ballot in the decision to organize a union with a “card check” system. The system would allow union organizers to place pressure — at times, undue pressure — on individual workers to “check” that “card” to organize a union. A secret ballot affords each and every worker, well, the secrecy of their vote on this matter. It affords them protection. So in a state such as Virginia, which cherishes a right-to-work tradition that for decades has been a foundation stone of state prosperity, Mr. Warner’s position, or lack thereof, should be political dynamite for the business community and its employees.

Asked no less than three times this past Friday during a question-and-answer session at The Winchester Star whether he would vote “yes” or “no” on this undemocratic bill, Mr. Warner admirably imitated a crawfish. He wiggled and danced, and gave explanations for his wiggling and dancing, but never did answer the question.

We find that middling odd — and much more when we note that such a committed old liberal as George McGovern has actually made a television commercial opposing this “undemocratic overreach.” Part of the script reads as follows: “Voting is an immense privilege. That is why I am concerned about a new development that could deny this freedom to many Americans. As a longtime friend of labor unions, I must raise my voice against pending legislation I see as a disturbing and undemocratic overreach not in the interest of either management or labor.”

We wholeheartedly agree with Mr. McGovern, but would lend a bit of nuance to his statement. While it is true that “labor” — and by this we mean individual workers — would see no benefit from this act, “Big Labor,” the unions themselves, could realize substantial succor.

For his part, Mr. Warner pledged fealty to the state’s right-to-work law and tradition, but said the process of union organization was an entirely different matter. He said “reform” of the process was necessary, and that “over the last eight years,” the balance had shifted too much toward management, at the expense of labor. Nonetheless, he did say he had certain “concerns” about provisions of the legislation in question. Bottom line: Mr. Warner said he would not vote for any measure giving an “unfair advantage” to labor or management, yet refused to commit either way on this piece of legislation.

Yet this bill would give an “unfair advantage” to labor leaders by taking away from workers the right to choose without coercion, the same right all Americans exercise in an election. What about this does Mr. Warner not understand — particularly when a liberal like George McGovern sees it so clearly? This is a right-to-work issue. 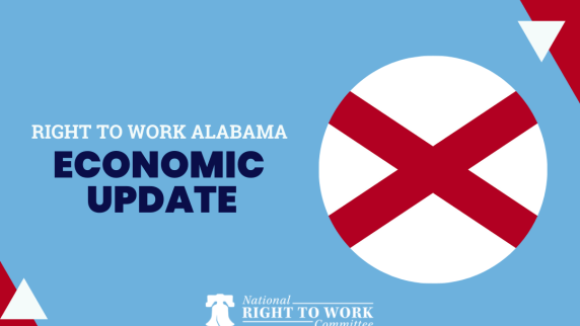 The most recent Right to Work Alabama investments are coming from Peak North America USA, as well as Gulf Distributing and HL Mando.