Some Big Labor officials often see monopoly bargaining power and the union as their own fiefdoms. In this case of a husband and wife duo who held the union positions of business manager and treasurer, they treated the union treasury and “apprentice” training trust as personal banking accounts. Had Hilda Solis not eliminated disclosure of union trusts, this embezzlement scheme might have been discovered earlier by the union’s members or labor department investigators.

Ronald Witt, 64, and his wife Anita, 56, were respectively the business manager and treasurer of local 450 of the International Union of Operating Engineers, whose members operate heavy equipment, mechanics and surveyors.

Prosecutors say the Witts embezzled funds from the union and its apprentice school — best to teach the young’uns the rough ways of the world early — and they spent it in style: “luxury trips for themselves and their friends, recreational travel trailers, purchases at hardware stores, personal meal expenses, rebuilding their Galveston home and depositing unearned union checks into their bank accounts,” the U.S. Attorney’s Office says. 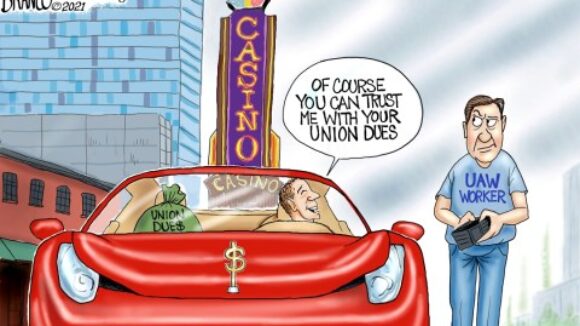