Newspapers from across the nation continue to urge Congress to fight the Big Labor power grab known as the Card Check Scam Bill. The Augusta Chronicle believes that a Pro-Big Labor Senate with a 60 vote super-majority should send shivers down your spine:

George Orwell is turning over in his grave. But if you live in Georgia, you can put a stop to it.

The so-called “Employee Free Choice Act,” is as Orwellian a name for any law we’ve ever seen. The proposed law before Congress, in fact, is not about free choice at all; rather, it seeks to restrict the free choice of those who don’t want to join a union, in a most underhanded way.

Democrats love the law for what it will do for their bread-and-butter Big Labor friends: It will take away employees’ right to a secret ballot when voting on whether to form a union.

Democrats and union bosses know that public votes on unions will put crushing pressure on intimidated workers to vote in favor of forming or joining unions.

And what kind of reprisals might the workers risk if they vote against the union?

This is precisely what Big Labor bosses are demanding as payback from the large Democratic congressional majority that they helped get elected.

Chambliss won the most votes in the Nov. 4 election, but just not enough to avoid a runoff on Dec. 2.

Chambliss may be all that stands in the way of Democrats gaining a filibuster-proof Senate majority — and their virtually certain approval of “card check.”

Here’s how it would work: Under current labor rules, if you are approached by a couple of burly, threatening-looking 200-pound guys asking you to sign a petition to establish a union shop at your place of work — and you are opposed to the idea — you can smile nicely and sign the petition, safe in the knowledge that you can vote against the union in the privacy of the voting booth. But under card check, you wouldn’t get a chance to cast a secret ballot. The petition would empower labor bosses to form a union shop if more than 50 percent of workers signed on.

What could be more un-democratic than abolishing the secret ballot? That’s what they do in dictatorships.

Union bosses claim that secret ballot elections are unfair because of management coercion and intimidation. This is simply not true. Government investigations have uncovered no evidence of widespread management abuse. And workers themselves say they have no problem with the National Labor Relations Board’s oversight of union elections.

Even more significant are polls showing that more than 70 percent of both union and non-union workers favor the secret ballot over card check. Moreover, coercion and intimidation is more likely to come from Big Labor’s thuggery than anything management does.

The misnamed Employee Free Choice Act is nothing more than Democrats paying off labor bosses — special interest legislation at its worst.

And didn’t President-elect Barack Obama promise he’d put an end to the clout of special interest lobbyists? Don’t count on it; he was for card check when he was in the Senate.

The re-election of U.S. Sen. Saxby Chambliss on Dec. 2 would greatly enhance the chance that Republicans could mount a successful filibuster against card check.

It’s not card check that the nation will need over the next few years, but a check against a left-wing Congress run amok. You can be sure Chambliss will help provide that check. His opponent would only add to it. 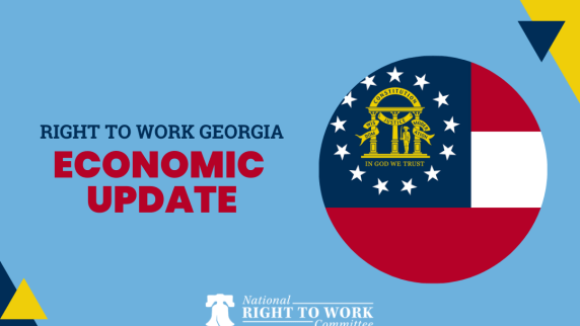 Businesses investing in Right to Work Georgia include Ecoplastic, Renewal by Andersen, and KISS USA. Altogether, they will create1,751 new jobs!

The latest investments in Right to Work Georgia are coming from Becker and Stuckey's, as well as Hyundai Mobis, and Steves & Sons.