Big Labor’s Waterloo? Not Likely until Compulsion is Completely Eliminated

George Will takes union bosses to task for their failed efforts in Wisconsin:

The residues of liberalism’s Wisconsin Woodstock — 1960s radicalism redux: operatic lamentations, theatrical demonstrations and electoral futilities — are words of plaintive defiance painted on sidewalks around the state capitol. “Solidarity forever” was perhaps painted by a graduate student forever at the University of Wisconsin. “Repubs steal elections” is an odd accusation from people who, seeking to overturn the 2010 elections, cheered Democratic lawmakers who fled to Illinois — a congenial refuge for labor-subservient Democrats — in order to paralyze the duly elected legislature. The authors of the sidewalk graffiti have at least read Jefferson: “The tree of liberty is watered by the blood of tyrants.” The tyrant is “$cott Walker American Fa$ci$t.”

Who, on a recent morning, was enjoying the view and the turn of events. From the governor’s mansion on the shore of sparkling Lake Mendota you can see on the far shore the famously liberal university, from which came many of those who protested his “budget repair” bill that already seems to have repaired many communities’ budgets, in addition to the state’s.

Ostensibly, the uproar was about Walker’s “assault” — Barack Obama’s hyperbole — on union rights. Walker’s legislation does limit the issues subject to collective bargaining and requires teachers and most other public employees to contribute more of the costs of their health and pension plans. Hitherto, in Wisconsin’s school districts, teachers contributed on average 5 percent or less to their health-care premiums.

During the recall tumult, unions barely mentioned either their supposed grievance about collective bargaining, or their real fears, which concern money, particularly political money. Teachers unions can no longer bargain to require school districts to purchase teachers’ health insurance from the union’s preferred provider, which is especially expensive. This is saving millions of dollars and reducing teacher layoffs. Also, unions must hold annual recertification votes.

And teachers unions may no longer automatically deduct dues from members’ paychecks. After Colorado in 2001 required public employees unions to have annual votes reauthorizing collection of dues, membership in the Colorado Association of Public Employees declined 70 percent. In 2005, Indiana stopped collecting dues from unionized public employees; in 2011, there are 90 percent fewer dues-paying members. In Utah, the end of automatic dues deductions for political activities in 2001 caused teachers’ payments to fall 90 percent. After a similar law passed in 1992 in Washington state, the percentage of teachers making such contributions declined from 82 to 11.

Democrats furiously oppose Walker because public employees unions are transmission belts, conveying money to the Democratic Party. Last year, $11.2 million in union dues was withheld from paychecks of Wisconsin’s executive branch employees and $2.6 million from paychecks at the university across the lake. Having spent improvidently on the recall elections, the Wisconsin Education Association Council, the teachers union, is firing 40 percent of its staff. 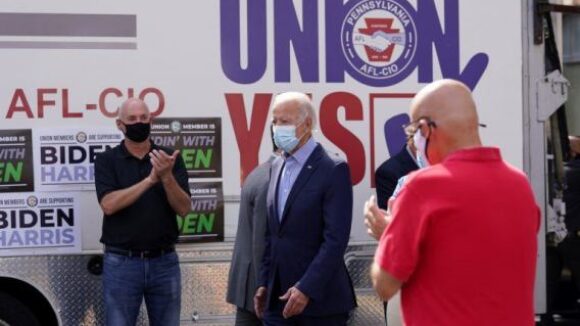