Last year, State Rep. Mike Shirkey (R-Clarklake), a staunch foe of compulsory unionism, led the charge in his chamber of the Michigan Legislature for the Right to Work measure signed into law in December by GOP Gov. Rick Snyder. Among…

Regardless of their general opinion of Pennsylvania Democratic politician Michael Nutter, the people of Philadelphia undoubtedly agree overwhelmingly that, as their duly elected mayor, he should be able to address the city council without being drowned out by a mob.

More and more elected officials across the country are coming to recognize the unsurprising fact that public policies promoting monopolistic unionism in the workplace are harmful to employees, employers and consumers.  And laws empowering one union to act as the…

Do Government Union Bosses Have 'Veto Power Over Which Options Are Put Before Voters'?

Last week, American Interest blogger Walter Russell Mead commented on an extraordinary unfolding battle in the Golden State.  As Mead explained in a March 6 post (linked below), the battle is a consequence of San Diego voters’ overwhelming approval last…

Why Should Taxpayers Keep Bankrolling 'Federal Employees' Who Do No Work For the Federal Government?

Union-label President Barack Obama and his allies in Congress have ferociously opposed legislative efforts to mitigate the potentially disruptive impact of the automatic federal spending cuts coming with sequestration.  The White House is making it clear it does not want…

So-Called 'Official Time' Is a Racket

Investor’s Business Daily editorializes about how the federal government is ripping off taxpayers to pay $100,000+ salaries to union officials who do no work whatsoever for the government.  This scam, which is especially maddening at a time when the U.S. 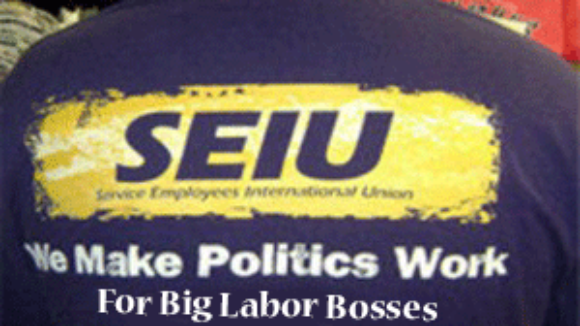 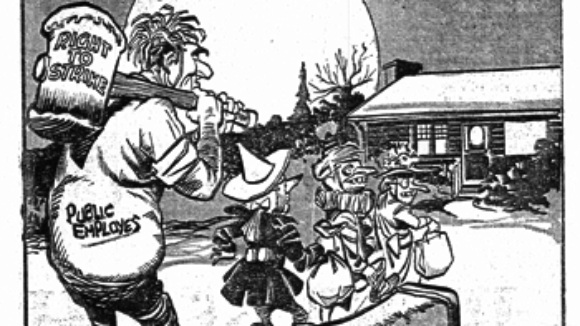 Reason opines that the fiscal reality of many cities have ended the love affair, in some instances, between local Democrat mayors and the union who elected them. But, it will likely not bring reform aslong as political machines a mostly funded and controlled by labor union bosses: When Chicago public school teachers started the fall semester by turning down a $400 million contract offer that would have boosted pay by 16 percent over four years, my first concern wasn’t for the children. It was for the Democrats.  Sure, the walkout by Chicago Teachers Union members caused havoc for kids. But I’ve been to public school, and I can tell you they didn’t miss much.  The strike’s lasting damage was to the party that since at least the early 20th century has been labor’s best friend. Chicago Mayor Rahm Emanuel is not just some schmuck in the donkey party: He is President Barack Obama’s former chief of staff, the congressional leader behind the Democrats’ 2006 House takeover, a Clinton administration arm twister so feared that he is still known by his ’90s nickname, Rahmbo.  But the strike made Chicago’s tough-guy mayor look like Chuck “Bayonne Bleeder” Wepner. Striking teachers dubbed him “Empermanuel,” accused him of having “no respect for us as people,” and even claimed (falsely, it turned out) that Emanuel was a fan of the Canadian alt-rock quartet Nickelback. When the teachers returned to work after more than a week on the picket line, they had scored a big pay increase and crippled the teacher-evaluation testing at the heart of the strike, a resolution Emanuel unconvincingly called an “honest compromise.” Emanuel is one of many recent Democratic chief executives who have, with varying levels of enthusiasm and success, tried to confront government employee unions. California Gov. Jerry Brown struggled for two years to get a minor pension bill through the legislature. New York Gov. Andrew Cuomo in March got a partial pension reform that is expected to save $3 billion a year out of the Empire State’s $133 billion annual budget. Washington, D.C., Mayor Adrian Fenty lost his job when he took on the teachers union.