Did Rendell Order the Hit?

When a non-violent protestor was attacked by a union mob in Philadelphia a decade ago, it was the mayor of the city, Ed Rendell, who invited the union activists with a penchant for violence to the rally and then encouraged the Teamsters to pursue assault charges against the victim, the Philadelphia Bulletin reports.

The case of Don Adams and his lawsuit against the union bosses has been discussed before, but this new twist shows the incestuous relationship between the Teamsters’ bosses and the current governor of Pennsylvania.

The history of the case is well known. Mr. Adams, his sister Teri and about 40 others went to Center City to protest a visit by President Bill Clinton on Oct. 2, 1998, in anticipation of the president’s impeachment for perjury and obstruction of justice.

During his drawn-out spell as a plaintiff, Mr. Adams found himself subject to a criminal complaint brought by Teamsters Heather Diocson and Sharon Hopkins, both of whom accused him of striking them. Footage from news cameras revealed no such attacks by him.

But now the Bulletin reports:

But a much more salient figure towers over Ms. Diocson and Ms. Hopkins in Mr. Adams’s memory of this protracted string of legal battles: Mr. Rendell. Contending Mr. Adams was a victim of malicious prosecution and that the Teamsters never owned up to their aggression at the protest, the Adamses filed a lawsuit in Oct. 2000 against Mr. Rendell, Philadelphia District Attorney Lynne Abraham, the International Brotherhood of Teamsters and Teamsters Local 115.

Mayor of Philadelphia at the time of Mr. Clinton’s visit, Mr. Rendell, according to several civil trial accounts, requested Teamsters’ local secretary-treasurer John Morris to bring his union’s members to City Hall the night of the president’s arrival. Court documents also note a conversation the president’s staff had with Mr. Morris to that end.

Mr. Rendell indicated the reason he wanted the union there in a deposition on Jan. 2, 2002.

“The president is coming to town,” Mr. Rendell said he told Mr. Morris. “We want a real good reception for the president. There may be some demonstrators there. And we certainly want in number and – and in loudness. We want to drown out the demonstrators.”

Mr. Rendell stated later in his testimony that he never learned of any history of violence in political situations on the part of the union leader or his associates.

But, attorneys for Mr. Adams contended in a statement of facts filed in United States District Court for the Eastern District of Pennsylvania, “Rendell gave these instructions knowing of Morris’s and Local 115’s reputation for violence…. That reputation is well-documented and actually adjudicated….” A federal circuit court ruling in 1986 ordered the Teamsters chapter to cease what were deemed violent rallying practices.

Mr. Adams found it chilling that this organization’s members should be brought to a likely protest site to “drown out” demonstrators. As such, allegations made against Mr. Rendell in the lawsuit thus included violation of free-speech rights.

But the plaintiff also believes that the mayor played a crucial role in initiating the failed assault charges against him and possibly attempting to lessen the penalties suffered by the five convicted Teamster assailants. Notes in which Mr. Woodring detailed a telephone call between Mr. Rendell and Mr. Morris on Oct. 5, 1998 indicated to Mr. Adams’s lawyers that the governor had told the union official:

1. “Nothing is going to happen to these guys” (i.e. the accused Teamsters)

2. “[I] will send [Police Commissioner John] Timoney up. Someone [from] police should interview” the women Teamsters accusing Mr. Adams of assault, and

3. A “private criminal compl.” by those individuals should be filed.

“No,” the former mayor answered. “I specifically said to John Morris that if they want to file a private criminal complaint, we’ll issue.”

“No,” the ex-mayor, then in the middle of a gubernatorial run, replied. “I said, call him on the phone,” he explained farther into the deposition.

Asked by the plaintiffs’ lawyer why he didn’t make any similar effort to apprise Mr. or Miss Adams of the legal avenues available to them, Mr. Rendell replied that because they had not contacted him, he did not feel it necessary to speak with them.

Mr. Morris died the month before Mr. Adams’s lawyers took the future governor’s June testimony, but on Aug. 13, 2002, Mr. Woodring issued his declaration to illuminate what his former boss and the mayor said to each other four autumns ago.

“As was our usual practice, and at Mr. Morris’ direction, I listened in on the conversation from another telephone extension and took accurate, contemporaneous notes in a spiral notebook,” Mr. Woodring wrote. “Mr. Morris was very upset and concerned about how the Teamsters were being portrayed in the media. Mayor Rendell tried to appease Mr. Morris and calm him down, telling Mr. Morris with respect to the Teamsters who had been caught on videotape attacking Don and Teri Adams, that ‘nothing is going to happen to these guys.’ Mayor Rendell continued to try to assure Mr. Morris that there would be no negative consequences for the Teamsters, stating ‘I know how these things go.’”

The former Morris chief of staff then turned his attention to whether the mayor recommended that Ms. Diocson and Ms. Hopkins pursue their accusations against the demonstrator.

“Mayor Rendell promised to send Police Commissioner Timoney to the Local 115 headquarters and stated that the police should interview the Teamster women Mr. Morris claimed had been attacked,” Mr. Woodring declared. “Mayor Rendell also suggested that the Teamsters should file private criminal complaints against Don Adams.”

At other points the statements of Mr. Rendell and Mr. Woodring again differ. Mr. Rendell, for instance, recalled chastising the Teamsters leader for his union’s behavior.

“I said,” the governor testified, “‘You detracted from what should have been a’ – the story in the headlines should have been, Philadelphia gives president great welcome. And instead of that, which was the facts [sic] and the truth, that there were a thousand times more supporters than protesters out there. Instead of that, the story was about this incident. And – and I told him that – that they had screwed up, and that the whole point of asking them to come out and show their support had been undercut by the actions of these guys.”

Mr. Woodring recollected, however, “With respect to the… phone call with Mr. Morris, Mr. Rendell did not tell Mr. Morris that he was angry with him nor did he say that the Teamsters’ actions had ruined the show of support for President Clinton. Further, I can state with certainty that the only reference by Mr. Rendell to the filing of a private criminal complaint was with respect [to] the Teamsters filing a private criminal complaint against Don Adams.”

Mr. Rendell did, in his testimony, qualify his comments about the actions of union members during the Clinton visit.

“Well, but it wasn’t like – it’s not a good incident,” he said. “I wouldn’t classify it as a civic disgrace.”

The governor’s office told The Bulletin he had no comment. 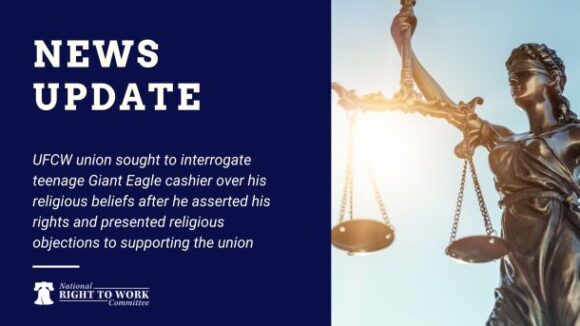