On Tuesday the U.S. Commerce Department’s Bureau of Economic Analysis (BEA) issued its initial estimates for total 2013 private-sector, nonfarm employment in the 50 states. The BEA simultaneously released revised estimates for overall state personal income and an array of specific kinds of income, including employee compensation in the form of wages, salaries, benefits and bonuses.

The 2013 BEA employment and income data show once again that there is a strong negative correlation between compulsory unionism and economic growth.

Nationwide, private-sector nonfarm employment as reported by the BEA grew by 11.2% from 2003 to 2013. (Unlike the establishment jobs data tracked by the U.S. Labor Department’s Bureau of Labor Statistics, BEA data encompass self-employment and contractual employment as well as payroll jobs.) However, some states fared far better than others.

In general, states that protect employees from being fired for refusal to pay dues or fees to an unwanted union enjoyed substantially more job growth than states where compulsory unionism is still permitted. Twenty-two states had bans on compulsory unionism, commonly known as Right to Work laws, on the books throughout the last decade. Two states, Indiana and Michigan, passed Right to Work laws in 2012. And 26 states remain forced-unionism today.

Overall, BEA-reported private-sector, nonfarm employment in Right to Work states grew by 16.2% over the past decade. That increase is 74% greater than the average for forced-dues states, and 41% greater than the national average. (See the first link below for more details.)

And workers in forced-unionism states suffer from lower compensation growth as well as fewer job opportunities.

From 2003 to 2013, inflation-adjusted private-sector compensation increased by 15.1% in Right to Work states. That’s nearly 1.6 times as much as the national average and more than 1.8 times as much as the forced-unionism state average. (See the second link below for more information. The BEA data are adjusted for inflation using the Labor Department’s Consumer Price Index.) The 10 bottom-ranking states for compensation growth all lack Right to Work laws. 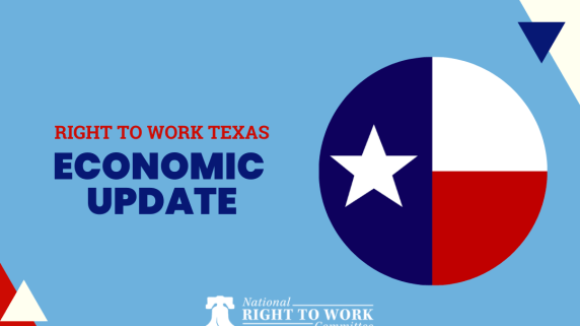