Union Dons Who Shortchanged Workers Would Be Let Off the Hook

blems facing lawmakers in Washington, D.C., today, one of the thorniest is what to do about an estimated $600 billion or more in unfunded pension promises to employees made by “multiemployer” pension plans (MEPPs).

These are private retirement funds that are controlled by Big Labor in partnership with unionized companies.

Hundreds of the roughly 1,400 MEPPs across the country are now in deep trouble primarily for one reason:

For years, the contributions going in, with the amounts directly determined through union monopoly bargaining, were insufficient to pay for the pensions that union bosses and their agents told workers they would provide.

Union-label Democrat politicians are now turning up the pressure on President Donald Trump and Capitol Hill Republicans to go along with a scheme to bail out MEPPs.

The price many Americans are paying for systematically underfunded MEPPs has only gotten higher in the nearly five years since Barack Obama signed the so-called “Multiemployer Pension Reform Act” (or “MPRA”) of 2014.

By altering 40 years of labor law, the MPRA has paved the way for unprecedented cuts in benefits for current retirees in troubled MEPPs.

The MPRA was rubber-stamped by a “lame duck” Congress during the Christmas season.

This happened only after Mr. Obama and then-Vice President Joe Biden (now a contestant for the 2020 Democrat presidential nomination) both “telephoned Democrats to secure the votes needed for passage of the [omnibus budget] package” into which it had been inserted, according to a contemporaneous Associated Press report.

Under the MPRA, plans that are classified as “critical and declining” are potentially eligible to reduce pension benefits by 30% or more.

In public, union bosses try to disavow responsibility for the MPRA.

But the fact is, the MPRA could never have been adopted without the support of multiple unions whose rank-and-file members, as a consequence of this law’s passage, have either already been hit with drastic benefit cuts, or could be in the near future.

In 2013, William Hite, then the general president of the United Association of Journeymen and Apprentices of the Plumbing and Pipefitting Industry (UA), endorsed the original blueprint for the MPRA, known as “Solutions, Not Bailouts” (SNB), when it was issued by a commission on multi-employer pension reform.

“We are going — it’s not a question of

if there are going to be benefit cuts.

In late 2016, the pension fund co-managed by the Cleveland-based Iron Workers Local 17 Union became the first in the U.S. to receive approval from the Obama Treasury Department to slash benefits for its members.

They could cast a vote in favor of losing up to 60% of their benefits starting February 1, 2017.

Or they could vote potentially to lose all their pension benefits when Local 17’s grossly underfunded pension plan ran out of money in 2024.

Not surprisingly, a majority of Local 17-“represented” workers who voted reluctantly backed severe pension cuts for all but the most elderly and/or infirm among them, rather than risk losing all of their pension benefits.

According to an analysis by the Washington, D.C.-based Pension Rights Center, there were 336 Local 17 retirees who experienced cuts of 30% to 60%.

In the two-and-a-half years since the Iron Workers Local 17 retirement fund took advantage of the MPRA to slash benefits, thousands and thousands of additional unionized workers and retirees have been subjected to pension cutbacks under the same law.

Today well over a million more unionized active employees and pensioners know their retirement benefits could soon be targeted for major, MPRA-authorized reductions.

They are naturally worried.

Meanwhile, Big Labor is trying to deflect the blame for a huge problem it played a central role in creating by pointing the finger at President Trump.

‘A Lack of Big Labor Accountability Is the Common Theme’

Pro-forced unionism Inside-the-Beltway politicians like Bernie Sanders, Vermont’s junior senator and a 2020 presidential hopeful, are demanding that Mr. Trump, and Republicans in Congress, back a  bailout of MEPPs, primarily through low-cost, subsidized loans that are guaranteed by taxpayers.

If they refuse, falsely claim Mr. Sanders and other union boss-puppet politicians, they will be responsible for whatever happens after funds like Central States go bust.

In June, the Big Labor-controlled Education and Labor Committee green-lighted H.R.397, the cynically mislabeled “Rehabilitation for Multiemployer Pensions Act,” or “RMPA,” in a 26-18 vote.

“At first blush, it might seem surprising that many of the same forced-unionism politicians who supported the MPRA in 2014 are now backing the RMPA.

“The MPRA empowers union operatives and other officers of grossly mismanaged MEPPs to cut retirement benefits without ever having to file for bankruptcy.

“The RMPA gambles tens of billions of dollars in taxpayer money to keep grossly mismanaged MEPPs afloat, without holding union bosses and any employers who colluded with them responsible for shorting workers out of their contracted compensation.

“The approaches seem different, but a lack of Big Labor accountability is the common theme.”

“Dr. Biggs might have added that many of the workers who now face steep pension cuts never even voluntarily joined the union whose officers are at fault for benefit-fund mismanagement.

“For these reasons and others, an MEPP bailout of some kind may be inevitable.

“But it would be an insult to taxpayers for Congress to furnish assistance to the workers and retirees MEPPs have victimized without taking concrete, meaningful measures to ensure the MEPP fiasco is not repeated.”

One of several safeguards proposed by Dr. Biggs, but unsurprisingly not included in the MPRA or the proposed RMPA, is that “any multiemployer plan seeking federal help should be taken over” by the Pension Benefit Guaranty Corporation, the federal agency charged with overseeing private retirement funds.

“It should be clear to everyone — pension participants, employers, unions and Congress — that this is a pension disaster, not business as usual. Putting failing plans in receivership sends that message,” explained Dr. Biggs.

“And ultimately Congress must end the pro-union monopoly federal labor policies that are largely culpable for the pension shortfalls that will surely be faced by millions of additional unionized workers over the next two decades.” 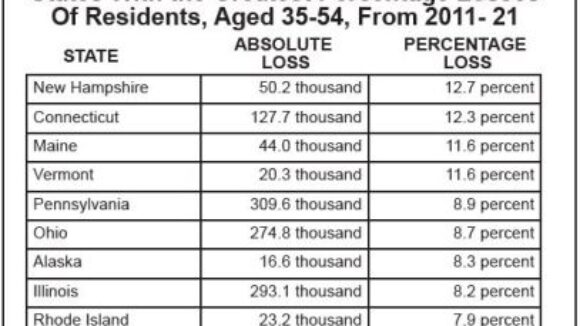