Right to Work Advocates Left Without a Choice in Special Election

Will the politicians ever learn? How many times does it have to be demonstrated that waffling on national Right to Work legislation is no way to protect yourself from union bosses and their electoral machine?

Late this winter, Pennsylvania state Rep. Rick Saccone (R-Elizabeth) became the latest in an extraordinarily long line of professed fence sitters on the compulsory-unionism issue to learn this bitter lesson from personal experience.

Campaigning for a U.S. House seat left vacant after the resignation of GOP Rep. Tim Murphy, Mr. Saccone refused to say how he would vote on a national Right to Work law if elected.

But his waffling on this key issue did not dissuade union political strategists from spending vast sums of union treasury money, overwhelmingly derived from forced union dues and fees, to ensure his defeat.

“For years, foes of forced unionism in the Keystone State have been pressing their elected representatives in Harrisburg to pledge support for a state Right to Work law,” noted National Right to Work Committee Vice President Mary King.

“Thanks to their efforts,” she continued, “a record number of the state lawmakers elected in 2016 had pledged to support a state Right to Work law. Unfortunately, Rick Saccone was not one of them.”

Grass-roots support for Right to Work in Pennsylvania is intensifying in part because of the ever-mounting pile of evidence that compulsory unionism is killing good job opportunities in the state.

For example, according to U.S. Labor Department data, manufacturing payroll employment in the 23 states that already had Right to Work laws on the books in 2012 grew by 5.5%, or 272,000 jobs, over the next five years.

Over the same period, factory jobs grew by only a third as much in the 22 states that still hadn’t adopted Right to Work laws as of 2017. In Pennsylvania, the number of manufacturing jobs actually fell.

Of course, state senators and representatives aren’t the only elected officials with the ability to prohibit forced union dues and fees in Pennsylvania.

Since private-sector compulsory unionism is authorized and promoted by federal labor law, Congress can end it simply by repealing every provision in the U.S. Code that imposed it in the first place.

Through its federal candidate survey program, the National Committee asked every major-party candidate for the southwestern Pennsylvania U.S. House seat formerly held by Mr. Murphy to support federal forced-dues repeal and back Right to Work across-the-board.

But Mr. Saccone refused to pledge to take away union bosses’ federally-granted forced-dues privileges or answer any of the other questions on his Right to Work candidate survey.

Three days before the March 13 special election, while Mr. Saccone was at a campaign event, a reporter directly asked him if he would support a national Right to Work law. Rather than answer, he called on another reporter.

“A few years ago, a scientific poll sponsored by the Harrisburg-based Lincoln Institute showed Pennsylvanians support Right to Work by a three-to-one margin,” recalled Ms. King. “But GOP nominee Rick Saccone gave pro-Right to Work citizens no reason to vote for him.

“Only a relatively small share of voters in Pennsylvania’s 18th U.S. House District agree with this stance, but Mr. Lamb made sure that minority was enthusiastic and motivated.”

Union kingpins repaid Mr. Lamb in spades. According to Pennsylvania AFL-CIO chief Rich Bloomingdale, over 1000 union operatives from around the country “volunteered” to visit targeted households throughout the 18th District to drum up support for Mr. Lamb and opposition to Mr. Saccone.

(Salaries as well as travel expenses for such Big Labor campaign “volunteers” are routinely financed with union dues and fees that millions of workers across America are forced to pay as a job condition.)

In the end, with massive support from Big Labor, Mr. Lamb defeated Mr. Saccone by under 800 votes in a district Donald Trump had carried in 2016 while unabashedly proclaiming his support for a national Right to Work law.

“If Rick Saccone had given Right to Work supporters a clear reason to vote for him,” concluded Ms. King, “he likely would have won.”

“And now, in the wake of Mr. Saccone’s defeat, pro-forced unionism media outlets like the Huffington Post are brazenly claiming the very Right to Work issue on which he refused to take a meaningful stand caused him to lose. That’s the icing on the cake.” 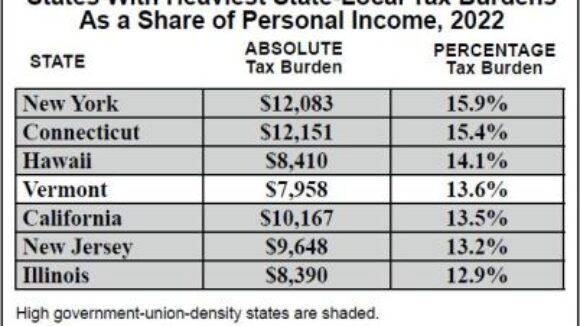 On a Collision Course With Fiscal Reality

There is a close connection between monopolistic government unionism, punitive taxation, and ineffective schools and public-safety departments.