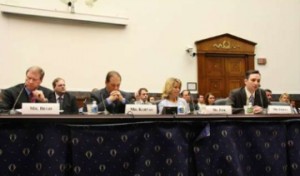 Testifying before a House Committee, David Bego described the tactics of the SEIU as ‘ruthless.” That is no surprise to anyone who has followed the antics of the purple shirted thugs.  From Claire Courchane of The Washington Times:

When officials from the Service Employees International Union tried to organize his management-services business in December 2005, David Bego’s refusal to sign a neutrality agreement with union organizers before the vote landed him in a battle he says took four years and cost him $1 million.

“I was appalled by the tactics and the ruthlessness they used,” the Indiana businessman told a House committee hearing Thursday. “It was psychological warfare.”

Republicans on the House Education and Workforce Committee called the hearing to highlight what they say are the negative effects of such union “corporate campaigns” on job-creation.

Committee Democrats countered that such campaigns can serve an important purpose in maintaining workers’ rights, improving the job market in the long run.

The hearing was prompted in part by the clash between the National Labor Relations Board and aerospace giant Boeing Corp. that has emerged as a flash point in corporate-labor relations. The NLRB, now dominated by President Obama’s appointees, is moving to block a major new Boeing plant in South Carolina for alleged labor-law violations, a move that has angered a number of leading business groups.

A June 14 hearing has been set on the unfair labor-practice charge filed against Boeing.

Chet Karnas, a New Mexico drywall contractor testifying on behalf of the Associated Builders and Contractors, told the House panel Thursday that the effects of union campaigns against businesses have been devastating for employment growth.

Mr. Karnas described unions going after him with inflammatory signs and letters to customers containing what he said were outright lies about his company’s benefits package.

“It’s bad for business. It’s bad for the reputation of construction companies. It’s a job-killer, not a job-creator by any means,” Mr. Karnassaid.

Mr. Karnas also said he faced substantial layoffs, and Mr. Bego added he thinks his company would have been able to add around 40 or 50 jobs if not for the legal fees needed to defend itself against the SEIU.

Invited by committee Democrats, Catherine Fisk, a law professor from the University of California, defended the use of union corporate campaigns. She said the campaigns put pressure on companies to adhere to the principles they claim to promote.

During the Obama years, Chairman Mark Pearce and his NLRB collaborators, including Kent Hirozawa and Nancy Schiffer (photo), waged war on…