[/media-credit]The state’s teacher union in Louisiana is threatening to sue schools who participate in the state’s voucher program, according to the Pelican Post.

The Louisiana Association of Educators (LAE) recently filed suit, arguing that the voucher program is unconstitutional.

On Wednesday, the LAE’s attorney, Brian F. Blackwell, of Blackwell & Associates in Baton Rouge, sent letters to the schools that have elected to participate in the state’s voucher program. In the letter, Blackwell claims that any school participating in the voucher program would be receiving “an unconstitutional payment of public funds.”

The letter goes on to insist that each school inform the Department of Education that it will not accept funding through the voucher program until the legal challenge has been resolved. Failure to do so by Friday, July 27 at 4:00 P.M. will result in the union instituting litigation against the school.

Clint Bolick, Vice President for Litigation at the Goldwater Institute in Arizona, has argued and won landmark cases in state and federal court on behalf of school choice programs around the nation. “In over two decades of school choice advocacy, I’ve never seen thuggery of this magnitude. What the unions can’t accomplish in the courtroom, they’re trying to achieve through bullying schools whose only offense is offering educational opportunities to children who need them.”

While it has become commonplace for unions to challenge state school choice programs on constitutional grounds, threatening the schools that offer to accept voucher students appears to be unprecedented.

“In my 16 years of promoting school choice, I have never seen a more brazen attempt to stop parents from selecting the school they think is best for their children,” said Robert Enlow, president and CEO of the Friedman Foundation for Educational Choice. “The teachers union and their allies have sunk to a new low in their attempt to put the interests of the system ahead of the interests of parents. I hope the public will see this action for what it is: a blatant strong-arm tactic to threaten parents and non-public schools.” 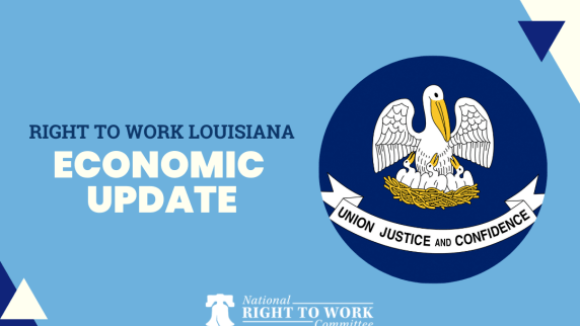 Right to Work Louisiana Has Great Things in Store!

Two businesses that are investing in Right to Work Louisiana are Aquaspersions and Healthy School Food Collaborative.

Two businesses investing in Right to Work Louisiana include Deere & Company and Schlumberger.