What if the NFL Played by Teachers' Union Rules?

Hall of Famer Quarterback Fran Tarkenton imagines what it would be like if the National Football League (NFL) adopted teacher’s unions rules with regard to hiring. It’s worth a read:

Imagine the National Football League in an alternate reality. Each player’s salary is based on how long he’s been in the league. It’s about tenure, not talent. The same scale is used for every player, no matter whether he’s an All-Pro quarterback or the last man on the roster. For every year a player’s been in this NFL, he gets a bump in pay. The only difference between Tom Brady and the worst player in the league is a few years of step increases. And if a player makes it through his third season, he can never be cut from the roster until he chooses to retire, except in the most extreme cases of misconduct.

Let’s face the truth about this alternate reality: The on-field product would steadily decline. Why bother playing harder or better and risk getting hurt?

No matter how much money was poured into the league, it wouldn’t get better. In fact, in many ways the disincentive to play harder or to try to stand out would be even stronger with more money.

Of course, a few wild-eyed reformers might suggest the whole system was broken and needed revamping to reward better results, but the players union would refuse to budge and then demonize the reform advocates: “They hate football. They hate the players. They hate the fans.” The only thing that might get done would be building bigger, more expensive stadiums and installing more state-of-the-art technology. But that just wouldn’t help.

If you haven’t figured it out yet, the NFL in this alternate reality is the real -life American public education system. Teachers’ salaries have no relation to whether teachers are actually good at their job—excellence isn’t rewarded, and neither is extra effort. Pay is almost solely determined by how many years they’ve been teaching. That’s it. After a teacher earns tenure, which is often essentially automatic, firing him or her becomes almost impossible, no matter how bad the performance might be. And if you criticize the system, you’re demonized for hating teachers and not believing in our nation’s children.

Inflation-adjusted spending per student in the United States has nearly tripled since 1970. According to the Organization for Economic Cooperation and Development, we spend more per student than any nation except Switzerland, with only middling results to show for it.

These same misguided beliefs are front and center in President Obama’s jobs plan, which includes billions for “public school modernization.” The popular definition of insanity is doing the same thing over and over, expecting different results. We’ve been spending billions of dollars on school modernization for decades, and I suspect we could keep on doing it until the end of the world, without much in the way of academic results. The only beneficiaries are the teachers unions.Over the past 20 years, we’ve been told that a big part of the problem is crumbling schools—that with new buildings and computers in every classroom, everything would improve. But even though spending on facilities and equipment has more than doubled since 1989 (again adjusted for inflation), we’re still not seeing results, and officials assume the answer is that we haven’t spent enough.

Some reformers, including Bill Gates, are finally catching on that our federally centralized, union-created system provides no incentive for better performance. If anything, it penalizes those who work hard because they spend time, energy and their own money to help students, only to get the same check each month as the worst teacher in the district (or an even smaller one, if that teacher has been there longer). Is it any surprise, then, that so many good teachers burn out or become disenchanted?

Perhaps no other sector of American society so demonstrates the failure of government spending and interference. We’ve destroyed individual initiative, individual innovation and personal achievement, and marginalized anyone willing to point it out. As one of my coaches used to say, “You don’t get vast results with half-vast efforts!”

The results we’re looking for are students learning, so we need to reward great teachers who show they can make that happen—and get rid of bad teachers who don’t get the job done. It’s what we do in every other profession: If you’re good, you get rewarded, and if you’re not, then you look for other work. It’s fine to look for ways to improve the measuring tools, but don’t let the perfect be the enemy of the good.

Our rigid, top-down, union-dictated system isn’t working. If results are the objective, then we need to loosen the reins, giving teachers the ability to fulfill their responsibilities to students to the best of their abilities, not to the letter of the union contract and federal standards.

In Michigan and Wisconsin, Right to Work is striving to avoid a “Tweedledee vs. Tweedledum” Election Day in which freedom-loving citizens have to choose between two candidates who are refusing to oppose forced unionism. 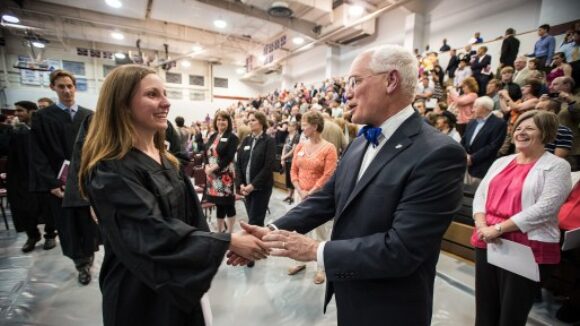 Employer demand for college-educated employees rose at a surprisingly rapid clip from 2010 to 2019, despite generally sluggish economic growth...