Yet Another Obamacare Giveaway For Big Labor?

President’s Allies May Be Exempted From Burdensome ACA Tax

At the very beginning of 2014, an array of key components of the so-called “Affordable Care Act” that was adopted in early 2010 will finally take effect. And over the past couple of months, countless ordinary citizens are learning for the first time, to their dismay, exactly what the impact of the ACA, otherwise known as ObamaCare, will be for them.

A November 17 Wall Street Journal editorial provided a sampling of the bad news: “Millions of Americans are losing their plans and paying more for health care, and doctors are being forced out of insurance networks . . . .”

But amidst all the late 2013 ObamaCare gloom, “a lucky few” have something to cheer about.

The Monday before Thanksgiving, the Obama Administration issued a proposed rule to exempt, starting in 2015, Big Labor-controlled health-insurance plans commonly referred to as Taft-Hartley plans from ObamaCare’s reinsurance tax on self-insured health-care plans.

Taft-Hartley plans are just one of an array of self-insured health-care plans offered by businesses, charities, and religious organizations. But the Administration’s proposed exemption applies, in effect, only to union-label Taft-Hartley plans.

“Enabling union plans to dodge the ACA’s reinsurance tax, which is expected to raise $13 billion in 2015 and 2016 alone, would give union bosses yet another tool to pressure employers into turning over their employees to Big Labor,” charged National Right to Work Committee President Mark Mix.

“Rather than fork over thousands of dollars more a year in taxes under the ACA, small businesses could allow a union to come in and wield its monopoly-bargaining power to negotiate a tax-exempt Taft-Hartley plan.

“Meanwhile, self-insured businesses and nonprofits that continued to stand up for their employees’ freedom to speak for themselves on matters concerning their pay and benefits would get stuck with paying even higher reinsurance taxes, because the total revenue raised would have to remain the same.”

Of course, the main reason the Obama Administration is now openly seeking an ACA tax carve-out for Big Labor that will be unavailable to anyone else is because union bosses have for months been loudly demanding that they get one.

And union bigwigs clearly don’t regard it as unseemly for them to pressure the President and his team to manipulate ObamaCare’s tax provisions to their benefit and at others’ expense. Perhaps they reason that, after all, they “own” the law.

Indeed, it was top union bosses who spent a billion dollars or more, mostly money from forced dues-laden union treasuries, to make Barack Obama President and elect a Congress that would rubber-stamp his agenda in 2008.

And it was Big Labor that spent additional vast sums of forced-dues money on lobbying efforts to ensure ObamaCare would be enacted in 2010 despite intense public opposition.

And it was the union hierarchy that again dug deep into its forced-dues treasuries to prevent ObamaCare’s repeal by getting the Obama-Biden ticket reelected in 2012.

From the time ObamaCare was originally introduced in Congress in 2009, Mr. Mix and other Right to Work leaders have denounced it as a Trojan Horse for forced unionism and called for the removal of all of its Big Labor special-interest provisions.

Thanks in part to the Committee’s efforts, ObamaCare supporters had to drop certain provisions promoting the forced unionization of the health-care industry before the scheme could become law.

However, the law as adopted remained full of handouts to Big Labor. For example, one little-discussed ObamaCare provision furnished $10 billion in bailout money for mismanaged union health-benefit funds.

“As long as the ACA in its current form, or anything remotely like it, remains law, it will be extraordinarily difficult to stop union officials from exploiting the enormous regulatory discretion it hands bureaucrats to further their institutional interests.

“However, passage of the Union Tax Fairness Act, or S.1724, would be a step in the right direction. It would block the Obama Administration from granting any special exemptions from the ACA reinsurance tax.” Mr. Mix vowed that in 2014 the Committee would help mobilize U.S. Senate support for this measure. 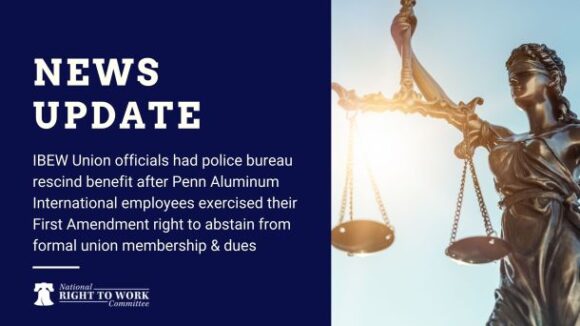