Leaders of the Denver Metro Chamber of Commerce are publicly complaining that perceptions of Colorado’s status as a non-Right to Work state have been and remain a major impediment to their efforts to bring job-creating capital investments to their city.

As Denver Chamber Executive Vice President Tom Clark acknowledged in a statement for the media issued early last month, “One of the first criteria a company uses to evaluate a location for investment is to determine whether a state is right-to-work or [forced] union shop.”

The observations of Mr. Clark and Denver Chamber President and CEO Kelly Brough, the former chief of staff of Democrat Mayor John Hickenlooper (now Colorado’s governor), are a particularly compelling tribute to the importance of Right to Work for raising employees’ incomes and business revenues.

Yet just seven years ago the Denver Chamber publicly opposed Amendment 47, an initiative to make Colorado a Right to Work state.

In the wake of the failure of the strategically unwise Amendent 47 in 2008, the tens of thousands of National Right to Work Committee members and supporters in Colorado and Committee leaders have joined together with grass-roots organizations and elected officials to build support for a state Right to Work law.

“We would greatly appreciate the active support of the Denver Chamber for our Right to Work mobilization and lobbying efforts,” said National Committee President Mark Mix.

“When Colorado finally becomes a Right to Work state, the perception problem about which Kelly Brough, Tom Clark, and other Denver Chamber officers have been complaining will disappear.

“Unfortunately, so far, instead of switching over to a pro-freedom stance, Denver Chamber leaders have opted to lobby the National Committee simply to redesignate Colorado as a ‘modified Right to Work state.’”

In late August, Mr. Mix received a letter cosigned by Ms. Brough and Mr. Clark discussing why they believe Colorado ought to be regarded as “modified Right to Work.” Mr. Mix disagrees that this is an appropriate label for the Centennial State, and has explained why in an open reply letter.

“State Right to Work laws,” wrote Mr. Mix, “shield private-sector employees from all the provisions in the National Labor Relations Act (NLRA) that authorize compulsory union membership, dues and fees by prohibiting the termination of employees for refusal to join or bankroll an unwanted union.”

In contrast, Colorado’s so-called “Labor Peace Act” (LPA) “explicitly authorizes private-sector union officials to seek and obtain the power to get union nonmembers fired if they refuse to pay so-called ‘agency’ fees that . . . are typically the same as full union dues.”

Mr. Mix’s letter continued: “The purpose of the LPA is simply to make it somewhat less easy for union officials to foist compulsory unionism on a workplace than it is under the NLRA itself.”

Moreover, it isn’t even clear the LPA accomplishes this very limited objective.

In 2014, according to the Union Membership and Earnings Database, maintained by labor economists Barry Hirsch and David Macpherson, 93% of the private-sector employees in Colorado who were subject to “exclusive” union representation were full-fledged members of the union in their workplace.

“That’s actually a little higher than the 92% average for other forced-unionism states last year,” Mr. Mix pointed out to Ms. Brough and Mr. Clark.

As this Newsletter edition goes to press, Mr. Mix has yet to receive a response from the two Denver Chamber leaders, but he remains hopeful they will agree to help make the Right to Work in Colorado a reality.

“Of course,” said Mr. Mix, “many factors contribute to a state’s economic performance, and no doubt Colorado has a number of good selling points for site selectors.

“Unfortunately, Right to Work protections for employees are not among them, and trying to recast the LPA as a ‘modified Right to Work law’ does nothing to change the underlying facts.

“But I eagerly await the opportunity to work together with Denver Chamber leaders to make Colorado America’s 26th Right to Work state.” 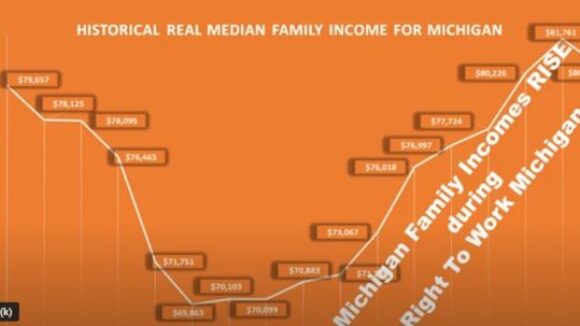