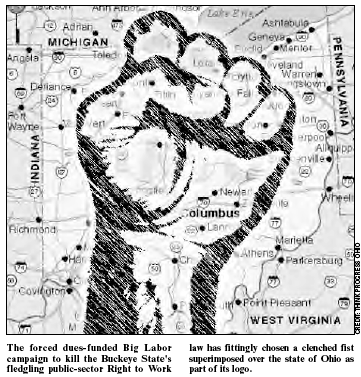 Stan Greer of the National Right to Work Committee comments on big labor’s ongoing efforts to have taxpayers finance their growing payroll costs in Ohio:

Over the past four decades, the share of Ohio private-sector employees’ pay that is consumed by the Buckeye state’s heavily unionized state and local government workforce payroll costs has soared dramatically.

Ohioans’ government employee spending burden grew vastly over the past 40 years even as the state’s constituencies for several key services furnished by state and local employees shrank as a share of the total population. For example, in 1970, 26.4 percent of Ohio residents were K-12 school-aged (5-17 years-old). By 2010, just 17.4 percent of Ohio residents were in the same age bracket.

As of 2010, 46.2 percent of the Buckeye state’s public employees were laboring under a contract negotiated by union officials wielding monopoly bargaining power. By comparison, just 9 percent of Ohio’s private-sector employees were unionized. Ohio is far from the only state in which business employees and employers are increasingly overburdened by a Big Labor-dominated government sector.

But Ohio’s private sector is having an especially hard time. While private employer expenditures for employee compensation increased by an inflation-adjusted 4.3 percent from 2000-2010 nationwide, Ohio businesses spent 6.6 percent less on employee compensation in 2010 than they had in 2000. Ohio is one of just five states with negative private-sector compensation growth over the past decade.

All five of these economic laggards have something in common: They lack a right-to-work law protecting employees’ freedom to refuse to join or pay dues or fees to an unwanted union, without being fired as a consequence. In fact, 13 of the 14 states with the lowest 2000-2010 private-sector compensation growth don’t have right-to-work laws.

The best news Ohio business employees and employers have had in many years was the passage into law this spring of Senate Bill 5, a government reform package that includes provisions protecting the right to work for all state and local public employees. It also reduces the scope of government union officials’ monopoly-bargaining privileges in several other ways.

While a full-fledged right-to-work law would do much more to get Ohio back on track, Senate Bill 5 marks a significant step in the right direction. Nearly half of the forced dues-paying employees in Ohio are government workers. A huge chunk of the loot Big Labor rakes in from such workers goes into electioneering and lobbying efforts in support of union officials’ tax-spend-and-regulate agenda — greatly impeding private-sector job and income growth.

Over the course of the next few years, Senate Bill 5 can begin undoing the damage Big Labor has wrought on Ohio over the years — if union officials’ ongoing, multimillion-dollar, forced dues-fueled campaign to overturn it is first thwarted.

A few months ago, union strategists successfully collected the number of signed petitions needed to block implementation of Senate Bill 5 and put their forced-dues reinstatement referendum, known as Issue 2, before voters on Nov. 8. For Senate Bill 5 to take effect and become permanent law, a majority of Ohio voters must vote yes on Issue 2.

Ohioans overwhelmingly support the principle that no one should be denied a job, or lose a job, because he or she refuses to pay dues or fees to an unwanted union. They also understand that in a state where, real private-sector compensation has fallen by 6.6 percent over the past decade, but real state and local government compensation has increased by 11.8 percent, something must be done to restore the balance.

Nevertheless, Issue 2 is in serious danger of being defeated if enough voters are confused by Big Labor propaganda that falsely implies Senate Bill 5 would slash school and public-safety budgets.

If this fear campaign succeeds, independent-minded public servants’ hopes of regaining their freedom to refuse to join or bankroll a union will be dashed. And Ohio’s already beleaguered private sector will sink deeper into the mire.

Right To Work States have been leader in Job Growth fro decades and will likely lead US post-COVID comeback. Forced-Unionism Regime…