Right to Work to Capitol Hill: ‘Keep Your Promises’ 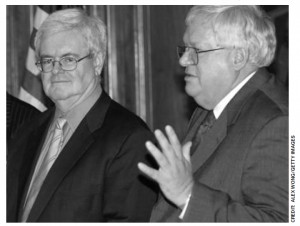 Former Speakers Newt Gingrich (R-Ga., left) and Dennis Hastert (R-Ill.) both made campaign pledges to support roll-call votes on forced-dues repeal, but blocked action on such legislation when Congress was in session.

Politicians Pledging to Back Right to Work Take Charge of House

Thanks in significant part to the efforts of National Right to Work Committee members across the country, starting this month the U.S. House of Representatives will be led by a speaker and a majority leader who have pledged full support for Americans’ Right to Work without being forced to join or pay dues to a union.

Now Committee members’ job is to make sure Speaker John Boehner (R-Ohio), Majority Leader Eric Cantor (R-Va.), and other members of Congress turn their pro-Right to Work promises into action.

Mr. Boehner and Mr. Cantor enjoy their top leadership positions in the House in part due to pro-Right to Work Americans’ support for congressional candidates nationwide who had pledged to oppose compulsory unionism.

Millions of pro-Right to Work Americans mobilized against candidates who supported compulsory unionism, or tried to hide their position on freedom in the workplace. These Americans expect Mr. Boehner and Mr. Cantor to lay the foundation for a new federal labor policy respecting each employee’s ability to decide for himself or herself whether or not to join or financially support a union, declared Committee President Mark Mix.

In the 2010 elections, voters firmly rejected major Big Labor power grabs such as the “card check” forced-unionism bill, which sailed through the House as recently as 2007 and seemed close to becoming law in early 2009, after Barack Obama became the 44th U.S. President.

Momentum Swings Toward Right to Work

A full-fledged Committee effort to get federal candidates on the record against the “card check” bill, or “Employee Free Choice Act,” as proponents cynically mislabeled it, surpassed expectations in mobilizing citizens and increasing the number of Right to Work supporters in Congress.

To activate Right to Work supporters, the Committee distributed a record-smashing total of nearly 8.4 million federal candidate Survey 2010 “information packets” through the U.S. Postal Service last year. Above and beyond that, the 2010 program had a massive Internet component, including nearly half a million e-mails transmitted in October alone. All this plus radio, TV, and newspaper advertising.

Lobbying by Committee members persuaded hundreds of House and Senate candidates to take a pro-Right to Work position, which in turn helped many get elected. That’s not surprising, given the Right to Work principle’s overwhelming public support.

“That means in this Congress the Committee actually has a chance, if members keep up the pressure, to pick up enough votes from the ‘mushy middle’ to push pro-Right to Work legislation through the House.”

“Instead of just fending off repeated Big Labor attempts to wipe out the meager protections for workers’ freedom as individuals in current federal labor law, Right to Work advocates are ready to go on the offensive in Congress,” Mr. Mix continued.

“This year, it won’t be enough for self-avowed Right to Work allies on Capitol Hill to oppose union-boss legislation. Pro-Right to Work Americans want the politicians they supported to help them regain the freedoms Congress has previously abrogated.”

According to Mr. Mix, Committee supporters will know the new House leaders are truly committed to fulfilling the pledges they, along with many other House candidates, made if they ensure hearings and floor votes on legislation such as:

The National Right to Work Act, which would restore millions of employees’ freedom to hold a job without being forced to pay union dues by repealing compulsory-unionism authorizations in federal law. (For more information, see page four.)

The Rewarding Achievement and Incentivizing Successful Employees (RAISE) Act, which would reform federal labor law by narrowing the scope of union bosses’ monopoly-bargaining privileges. Specifically, the RAISE Act would allow unionized employers to pay individual employees more than a union contract calls for without having to get union bosses’ permission first.

Mr. Boehner Will Need To Hear From Right to Work Supporters

While freedom-loving Americans are hopeful that Speaker Boehner will make good on his 2010 campaign pledges to defend the Right to Work, history indicates pressure from Committee members may well be necessary to keep him on the correct course.

“When union lobbyists rammed the so-called ‘Public Safety Employer-Employee Cooperation’ Act through the House in July 2007, the GOP House leadership team failed even to send out an e-mail urging caucus members to oppose the scheme until an hour before the floor vote,” Mr. Mix pointed out.

“Since the House was in session when the last-minute e-mail was finally transmitted, many of Mr. Boehner’s caucus members likely did not even know their leaders were opposed to the public-safety union power grab until after it had already been rubber-stamped by the chamber.

“Fortunately, thanks to Committee members’ determined efforts, this destructive legislation never became law. [See page eight for more information.] Nevertheless, this incident reminds us that Right to Work mobilization is always necessary, regardless of who holds the congressional reins.

“That’s why we will need to watch closely to see if Speaker Boehner allows the Right to Work Bill and the RAISE Act to get fair consideration. I’m confident Committee members will be willing and able to let Mr. Boehner know they want action on these bills.”

Tough Battles Ahead For Right to Work Committee And Its Members 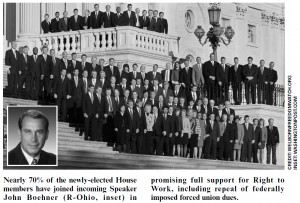 The substantial Right to Work gains in the 2010 elections are encouraging, but freedom-loving citizens must keep their eyes wide open, Mr. Mix cautioned.

“Previous U.S. House speakers like Newt Gingrich [R-Ga.] and Dennis Hastert [R-Ill.] also made campaign pledges to defend the Right to Work, but avoided confrontations with Big Labor once Congress was in session,” he noted.

“However, despite all the pitfalls ahead, if Committee members and supporters remain mobilized, the 112th Congress could be a historic turning point in favor of Right to Work.”

Mr. Mix urged Committee members to call their U.S. representatives at 202-225-3121 (or my e-mail through the Committee’s Website) and urge them to support pro-Right to Work legislation every chance they get. Just ask for your representative by name.