With free legal aid from the National Right to Work Legal Defense Foundation, Spanish Broadcasting System radio host Adal Loreto is defending his and his coworkers’ right to vote unwanted Stage Actors’ Guild (SAG-AFTRA) union officials out of their workplace. In July, Loreto filed a petition for a group of his coworkers seeking a vote to end union officials’ so-called “representation” over on-air talent of KLAX­FM and KXOL-FM radio stations.

That National Labor Relations Board (NLRB) decertification petition resulted in a mail ballot election conducted in August and September. However, the workers’ ballots were never actually counted. Now, Loreto and his National Right to Work Foundation staff attorneys have filed a Request for Review at the National Labor Relations Board in Washington, DC, asking the Board to overturn NLRB Region 31 Director Mori Rubin’s order that the workers’ ballots be destroyed and never counted. […]

“Mr. Loreto’s situation illustrates perfectly how the NLRB, an agency that is supposed to neutrally enforce federal labor law, puts its thumb on the scale to assist union boss schemes to retain power over the wishes of rank-and-file workers,” commented National Right to Work Foundation President Mark Mix. “This situation is even more egregious as the NLRB is disobeying its own rules and regulations to disenfranchise workers who simply want their votes to remove SAG-AFTRA from their workplace counted.” 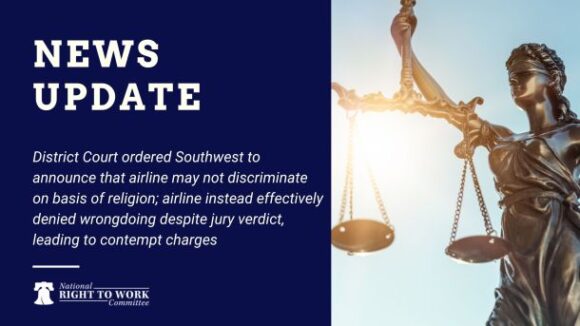