‘Wrongful Use of…Violence and Fear’ 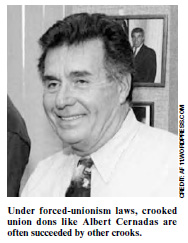 Just last September, Tommy Leonardis, president of the Newark-based Local 1235 of the International Longshoremen’s Association (ILA), attended a hearing at the New Jersey Capitol in Trenton to protest a state program targeting Organized Crime in the New York harbor region.

Mr. Leonardis insisted Mafia infiltration of the ILA and the waterfront was a thing of the past, grumbling that the program unfairly “tars the industry as mob-influenced.”

But last month, a federal grand jury issued an 82-page indictment charging that it is in reality ILA union bosses like Mr. Leonardis who continue to blacken the reputation of the New Jersey waterfront.

The indictment accuses Mr. Leonardis, along with former Local 1235 Presidents Albert Cernadas and Vincent Aulisi, the latter’s son Eddie, and Nuncio LaGrasso, vice president of another Newark-based ILA local, as well as other conspirators, of running an extortion operation in which unionized workers were the principal victims.

Specifically, Mr. Leonardis and other conspirators “agreed to obtain property of ILA members, that is: money belonging to ILA union members, with their consent, which consent was to be induced by wrongful use of actual and threatened force, violence and fear.” One especially egregious form of extortion of which several ILA union-boss defendants are accused is the collection of “Christmas tribute” money from dockworkers after they received year-end bonuses. This tribute was allegedly funneled into Genovese Crime Family coffers as well as ILA chieftains’ pockets.

A Foreman Who Protests Shakedowns May Need ‘to Be Physically Assaulted’

Federal prosecutors’ January 20 arrests of half-a-dozen current and former ILA officials and their cohorts were only part of a larger takedown that day. Also indicted was Ralph Scopo Jr., the former president of Local 6A of the New York Cement and Concrete Workers union. This local is affiliated with the notorious Laborers International Union of North America (LIUNA).

The indictment in which Mr. Scopo is named alleges that he and his son, Ralph III, current union president and an unindicted coconspirator, have run Local 6A as a front for the Colombo Crime Family.

Among the favors done by Local 6A kingpins for the Colombos was the “coffee boy” scam. In this shakedown, occurring at every 6A-controlled job site, workers were forced to buy all their lunches, snacks and drinks from a mob-selected vendor who kicked back $250 a week to the Colombos.

When one foreman protested such extortion, Ralph Jr. escorted him to a meeting with Colombo captain Dino Calabro and Ralph III. According to the indictment, during the meeting Ralph Jr. explained to Mr. Calabro that he had brought along Ralph III in case the foreman “needed to be physically assaulted.”

“The ILA’s New Jersey locals and LIUNA Local 6A are representative of many other union operations that have remained crooked, decade after decade, despite multiple crackdowns by law enforcement,” noted National Right to Work Committee Vice President Matthew Leen.

“And federal labor laws that force employees to accept unwanted union representation and pay union dues or fees as a condition of employment are the single most important reason why. Forced unionism denies ordinary honest employees the opportunity to fight back against corrupt union bosses by quitting the union and withholding their dues money.

“As the late labor law scholar and onetime unpaid union organizer Sylvester Petro put it, the denial of the rights of ‘individual workingmen’ is the ‘basic cause of almost every antisocial aspect in labor relations . . . .’

“That’s why the Committee is determined to pass national Right to Work legislation, and thus repeal all federally-imposed forced dues.”

Right to Work Edge: More Money in Your Pocket