The cards were stacked in favor of workers and against the union bosses in Indiana before Gov. Mitch Daniels decided to snatch defeat from the jaws of victory. His work to kill the effort to give Indiana workers Right to Work protection allowed AFL-CIO boss Richard Trumka to declare victory. From the Talking Points Memo:

Trumka told TPM at a roundtable with reporters that despite the hardships he said were faced by union workers, labor supporters and Democrats in general in Indiana, progressive-leaning politicians in the Hoosier state were able to pull off the upset win.

“I mean, they knocked out right to work,” Trumka said, referring to the AWOL state House Democrats, who returned to Indianapolis after winning concessions from the majority GOP. 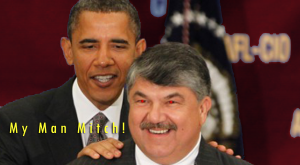