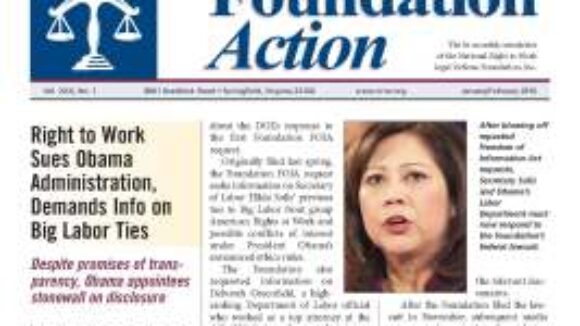 Senator-elect Scott Brown (R-MA) hasn’t taken a vote in the Senate yet but the government union bosses are already trying to intimidate him.

Senator-elect Scott Brown (R-MA) hasn’t taken a vote in the Senate yet but the government union bosses are already trying to intimidate him.

Rather than carryover National Labor Relations Board (NLRB) nominee and current AFL-CIO and Service Employees International Union lawyer Craig Becker until next year like most of president Obama’s nominees, the U.S. Senate sent a message back to the President about his nominations. While not a severed horse head in his bed … it is like the canary in the coal-mine. Right after the Becker nomination, The National Right to Work Committee posted this President Obama Personnel Alert video regarding Becker (link here) along with the Committee’s Becker Alert report (link here). The report highlights the Association of Community Organizations for Reform Now (ACORN) Founder Wade Rathke’s ringing endorsement of Obama’s Becker nomination. Rathke wrote, “Here’s a big win no matter how you shake and bake it: Craig Becker being nominated for a seat on the National Labor Relations Board (NLRB)!”

The National Right to Work Committee President Mark Mix discussed the Big Labor commuter shutdown that is hurting workers all across Philadelphia with Fox Business Channel’s Brian Sullivan. Mix pointed to the fact that many union members did not want…