The National Right to Work Legal Defense Foundation has filed a formal complaint with the Federal Election Commission (FEC) asking it to investigate charges made by two Alabama educators who discovered a union scheme to divert their money into the National Education Association’s (NEA) political action committee (PAC).

Claire Waites, the chair of the science department, and Dr. Jeanne Fox, an assistant principal, both work at Daphne Middle School in Bay Minette, Alabama. Waites and Fox are both members of the Baldwin County Education Association (BCEA), Alabama Education Association (AEA), and NEA teacher unions.
In July 2008, Waites and Fox attended the NEA’s annual convention in Washington, DC, as delegates of the BCEA. By telephone, BCEA union president Saadia Hunter informed Waites and Fox that contributions to a “children’s fund” in their names were made from money included in their expense reimbursements for their trip to the convention.

Although Hunter told Waites that these contributions were not political in nature, they actually went to the NEA’s PAC, the NEA Fund for Children and Public Education.

Later, Hunter admitted that the money would be contributed to Barack Obama’s presidential campaign. Sworn statements by Waites and Fox indicate that the AEA union boss also admitted that the PAC contributions were paid with BCEA members’ dues. However, it is illegal for unions to contribute to political candidates using “dues, fees, or other moneys required as a condition of membership in a labor organization.”

Teacher union officials also violated federal law by encouraging and soliciting contributions under false pretenses and without informing Waites or Fox of their right to refuse to contribute without any reprisal. Federal law also forbids campaign contributions made in the name of another person.

“This union money laundering scheme makes a mockery of federal election law,” said Stefan Gleason, vice president of the National Right to Work Foundation, which has joined Waites and Fox as a complainant. “We suspect this scheme was widely used by the NEA union hierarchy and could involve hundreds of thousands of dollars. We urge the FEC to take decisive action.” 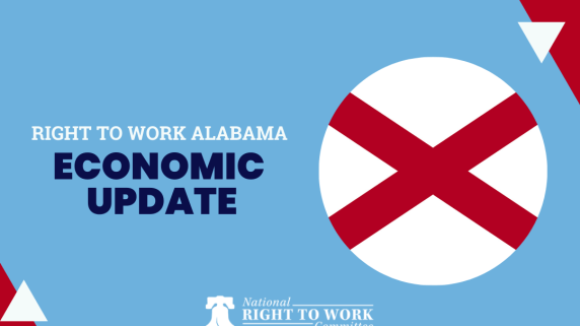 Companies investing in Right to Work Alabama include Shinhwa, Novelis, Airbus, and Cerrowire. These will create 2,172 new jobs!