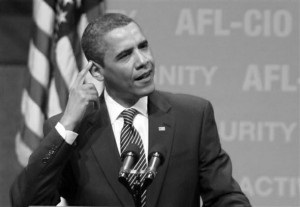 AFL-CIO boss Dick Trumka speech where he issued the hollow threat to the Democrat Party to take his fidelity elsewhere, is being called Trumka’s Tirade by the Pittsburgh Tribune:

Big Labor boss Richard Trumka has issued an ultimatum to unions’ lackeys in Congress: Meet our unrelenting demands or find another sugar daddy to fund your campaigns next year.

“We will spend the summer holding elected leaders in Congress as well as the states accountable on one measure: Are they improving or degrading life for working families (of union members)?” says the AFL-CIO’s Mr. Trumka.

And Trumka says Democrats may be “controlling the wrecking ball” that’s hurting unions. How’s that for gratitude?

Whereas unions, given their substantial contributions to Democrats in the last presidential election, didn’t get everything on their quite lengthy wish list, they’ve made substantial inroads with Team Obama at the federal level.

Those inroads lead to the National Labor Relations Board.

In its worst example yet of union-coddling, the NLRB is squeezing Boeing Co. over its plans to build a nonunion factory in South Carolina instead of augmenting a union facility in Washington state. For manufacturers, the ramifications are chilling.

What Trumka is demanding from Congress are more bailouts, interventions and, where necessary, employer arm-twisting, says Fred Wszolek of the Workforce Fairness Institute.

No thanks. The swing of Big Labor’s own massive wrecking ball has done enough damage to the economy and free market.

“Give us $1000, or you’ll be fired from your job.” That sounds like an extortionate threat. And such threats are indeed often illegal.