To Justify Her Lawlessness, Jennifer Abruzzo Distorts the Past

Very soon after being confirmed in a razor-tight U.S. Senate vote last year as general counsel for the powerful National Labor Relations Board (NLRB), Jennifer Abruzzo, formerly a lawyer for the radical Communications Workers of America union, made her agenda plain to all.

Clearly acting on the wishes of the man who nominated her for the job of NLRB general counsel, Big Labor President Joe Biden, Ms. Abruzzo broadcast her intention to wield the power of her office to help union officials grab monopoly-bargaining power over millions of additional workers.

Since then, a key part of Ms. Abruzzo’s program to assist union organizers has been the imposition of fines and other penalties on employers simply because they insist their employees get a chance to vote in a secret-ballot election before they are subjected to monopoly union control.

And she claims the current rabidly pro-union-monopoly NLRB majority consisting of member Lauren McFerran, elevated to the chairmanship by Mr. Biden, and two Biden appointees can make this radical policy change by bureaucratic fiat, with no input from Congress.

“Prior to the approval of the Taft-Hartley amendments, Big Labor bosses would often present to employers pro-union cards purportedly signed by a majority of their production workers, and demand to be granted monopoly-bargaining privileges over those employees based on those cards alone, without a vote.

“Recognizing that many employees signed so-called ‘union authorization’ cards only after being ‘cajoled, coerced and intimidated,’ and in some cases ‘beaten up’ by Big Labor agents, Congress sought to prevent monopoly-bargaining regimes from being installed when a majority of workers didn’t want one.”

During the floor debate over the Taft-Hartley amendments, lead Senate sponsor Robert Taft (R-Ohio) vividly summed up Congress’s motivation in permitting an employer to petition for a secret-ballot election whenever any union official demanded to be given monopoly-bargaining power via a “card check”:

“Today an employer is faced with this situation. A man comes into his office and says, ‘I represent your employees. Sign this agreement or we strike tomorrow.’

“The employer has no way in which to determine whether this man really does represent his employees or not. The bill gives him a right to go to the [NLRB] and say, ‘I want to know who is the bargaining agent for my employees.’”

Unfortunately, over the 75 years since Taft-Hartley was enacted, NLRB bureaucrats have time and again sought to limit the secret-ballot protections for employees and employers furnished in subparagraph (B) to Section 9(c) of the National Labor Relations Act (NLRA) as amended.

Nevertheless, throughout all of those years, employers who wished for their employees to get a secret-ballot vote prior to the employees’ being corralled into a union have ordinarily succeeded.

But Jennifer Abruzzo is determined to eliminate even this modest protection for employees and business owners who prefer to remain union-free by forcing all employers who resist Big Labor demands for “card check” recognition to jump through onerous procedural hoops before their employees get a chance to vote in private.

To justify her insistence that employers ignore Big Labor bullying and intimidation, and acquiesce to “card checks” unless they have undeniable proof of forged signatures or other flat-out fraud, Ms. Abruzzo falsely claims this was the NLRB’s rule prior to the U.S. Supreme Court’s 1969 Gissel decision.

Mr. Mix explained:  “This April 11, Ms. Abruzzo’s office filed a brief calling on the five-member NLRB to routinize forcing employers to recognize a union as the monopoly-bargaining agent of all front-line workers if 50% plus one of them signed union cards.

“In Cemex Construction Materials Pacific, Ms. Abruzzo and her subordinates have insisted there is nothing wrong with forcing employers to ‘prove’ union bosses have violated the law before their employees can get an opportunity to vote.

“According to Ms. Abruzzo et. al., employers had to do this pre-Gissel.

“They conveniently ignore how, during the Gissel arguments, the NLRB attorney and the union attorney agreed that, under then-current law, employers who had not committed egregious unfair labor practices could insist on an election based solely on their belief that cards are not a reliable gauge of employee views!”

“The stance taken by Jennifer Abruzzo and her subordinates in the Cemex case is cynical and ahistorical, as well as flagrantly anti-worker.

“But fortunately, it is not yet the law of the land.

“Employers will not actually be regarded as guilty of so-called ‘unfair labor practices’ simply because they insist their employees be given a chance to vote in a secret-ballot election before they are put under a union monopoly unless and until the Biden NLRB rules in accord with Ms. Abruzzo’s wishes.

“Since three of the five current members of the NLRB have established track records as radical proponents of compulsory unionism, it is hard to hold out too much hope that the Biden NLRB will decide that Ms. Abruzzo and Co. are asking for too much.

“But it may well be that, before the Cemex ruling is issued and becomes entrenched, American voters who are disenchanted with Joe Biden’s failed policies will have had their say and helped put supporters of Right to Work in key congressional leadership positions.”

Then, in 2023, congressional leaders who are willing to stand up to Joe Biden will be in a position to use their appropriations power to stop the NLRB from implementing a decision that effectively mandates “card check” unionization of workers. 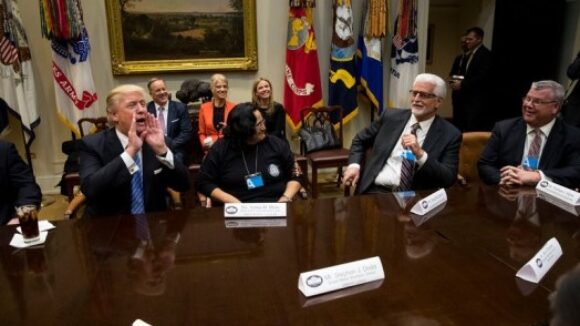