From the National Right To Work Legal Defense Foundation: 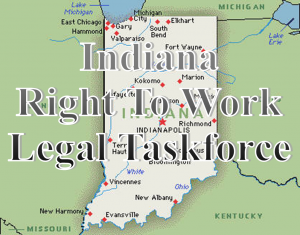 Union officials publicly floated the idea of challenging the law in Indiana’s courts before the law was even passed by the Indiana state senate.

Indiana is the nation’s 23rd Right to Work state after the state senate passed the bill and Governor Mitch Daniels signed the bill into law on Wednesday.

Foundation attorneys have successfully defended state Right to Work laws in the past, including Oklahoma’s. The task force has already examined reported union lines of attack and determined that Indiana’s Right to Work law is on sound legal ground.

“Union bosses want to undo what thousands of Hoosier citizens have worked hard for over the past decade,” said Mark Mix, President of the National Right to Work Foundation. “Because union partisans cannot win the hearts and minds of Indiana’s workers and voters, they seek to have the courts strike down Indiana’s popular Right to Work law for them.”

In addition to defending the Right to Work law from spurious union legal challenges, National Right to Work Legal Defense Foundation staff attorneys are, as always, available to give free legal aid to employees seeking to exercise their Right to Work. Because the Indiana law applies only to forced dues clauses entered into after March 14, 2012, many employees may not be able to cut off all dues immediately. However, those employees can still exercise their right to refrain from formal union membership and cut off union dues being spent on politics.

Public polling shows that nearly 80 percent of Americans support the Right to Work principle, including 80 percent of union members.

Information about Indiana’s Right to Work law, including how Indiana employees can exercise their Right to Work can be found on the Foundation’s website: www.nrtw.org.

As Member Job Losses Soar Due to Coronavirus, Union Bosses Focus on Avoiding Disruption of Their Coerced-Dues Cash Flow

Forced-Unionism Abuses Exposed – The facts Big Labor bosses would rather you didn’t hear about. “[C]ompulsory unionism and corruption go hand…

Still Extorting Dues From Members Who Have Quit

For over seven months, teacher Ifeoma Nkemdi (pictured) and school technology coordinator Joanne Troesch have been trying to stop bankrolling the…